Intel announced its 4004 processor and its chipset through an ad in Electronic News on November 15, 1971, making them the first complete CPU on one chip and the first commercially available microprocessor. 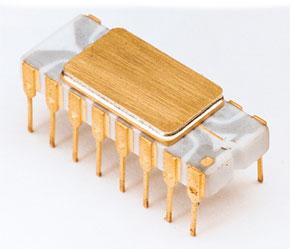 The building-block 4004 CPU held 2300 transistors. The microprocessor, the size of a little fingernail, delivered the same computing power as the first electronic computer built in 1946, which, in contrast, filled a room. Full technical details for the 4004 can be found in this January 1972 EDN story on the technology: One-Chip CPU available for low-cost dedicated computers.

The Intel 4004 became the first general-purpose programmable processor on the market after Nippon Calculating Machine Corp approached Intel in 1969 to design 12 custom chips for its new Busicom 141-PF printing calculator. According to Intel’s online museum page on the 4004: Intel engineers suggested a family of just four chips, including one that could be programmed for use in a variety of products, setting in motion an engineering feat that dramatically altered the course of electronics.