Designing a DC/ DC converter that only consumes micro amps of current at no load can be compared to fueling a muscle car with lighter fluid – you may get it to work, but it won’t be easy. High efficiency at full load currents is commonplace in most modern DC/DC converters; however, achieving high efficiency when the load is disabled or disconnected is still a difficult and/or expensive task. 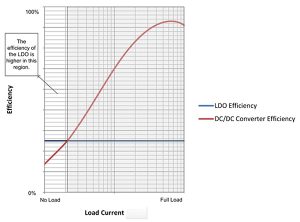 Many automotive and industrial applications require efficient 12 V or 24 V buck power conversions from the main supply down to the point-of-load (POL) voltage at full load, but also need very low current consumption when the device is in an idle or shutdown state. In order to achieve such low current, you can easily use a Low Dropout Regulator (LDO) in parallel with a buck converter to achieve minimal current draw from the battery when the system enters a light-load/no-load state.

Ultimately, the ideal situation to prolong battery life in the system would be to disable every possible device from the input supply. In some cases though, a sub-regulated voltage is still necessary for certain components within the system to allow communication with other system blocks during the shutdown state (i.e. a CAN bus transceiver in an automotive application). DC/DC converters that are not specifically designed for light-load efficiency can consume several milliamps with no load. Additionally, converters that do exhibit high light-load efficiency will utilize frequency-foldback schemes and discontinuous mode operation, resulting in noisy output voltages and excessive EMI emissions. An LDO is ideal for light load situations because they can be designed to consume very low currents while maintaining a low noise output voltage. The no-load current into the input (also called “ground current”) can be on the order of a few micro amps or lower. Combining the performance of both converter and LDO, therefore, has obvious benefits.

A simple method of using both in parallel is possible if the designer has the ability to disable the DC/DC converter when the loads will be minimal, i.e. using the same enable/disable signal for the converter that is used for the load. An example of this can be seen in Figure 1. 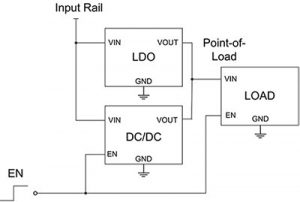 Block diagram of DC/DC converter in parallel with LDO(Courtesy of Texas Instruments). 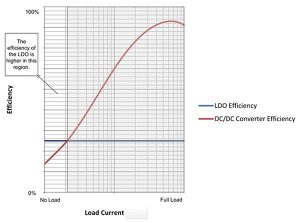 The battery life can be extended by a factor of 20x.

The discussion will now shift to how this circuit was implemented with TI devices.

The circuit in Figure 3 shows an example of efficiency improvement with an LDO in parallel with a DC/DC converter. 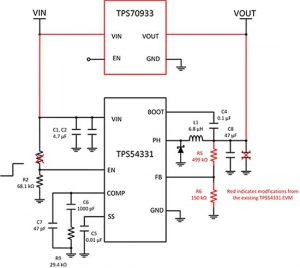 TPS709 in parallel with TPS54331(Courtesy of Texas Instruments)

The LDO selected is the TPS709, which has a 30 V input range with only 1 µA nominal ground current. The DC/DC converter is the TPS54331, selected for its input voltage range and high efficiency. The TPS54331 already exhibits high efficiency at light loads in comparison to most comparable DC/DC converters. However, at 110 µA (typical) non-switching quiescent current, the no-load current of the converter is nearly 100 times greater than the ground current of the TPS709 at no load (1.3 µA), even before switching losses and feedback resistor loads are factored in. 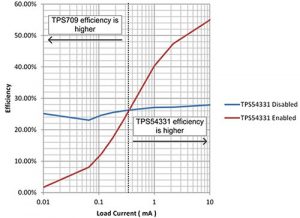 Efficiency with the implemented circuit, TPS54331 enabled and disabled(Courtesy of Texas Instruments)

If the load circuit has a high-current slew rate when enabled, it may be necessary to delay the enable circuit to the load so that the DC/DC converter has sufficient time to be enabled before the load demands current from VOUT. This can easily be done with an RC delay, however, care should be taken that the load does not remain on after the DC/DC is turned off. A diode in parallel with the resistor can achieve this. Figure 5 shows an example of this circuit. 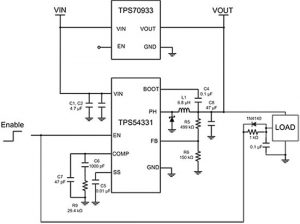 shows the system response time scope shots of the system, along with the enable signal enabling the circuit into a 1 A load. 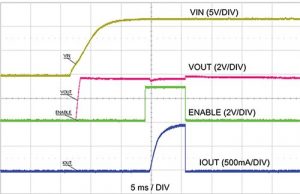 Startup and enable/disable of circuit in figure 3.

Read more: How to Improve Buck Converter Light Load Efficiency with an LDO

Duffy the mobile robot moves alongside you connected through a "light leash" and alerts you of objects around the path....