It’s quite a common problem when building electronics that some components need cooling which is usually done through some sort of heatsink and optional fans. Choosing the right cooling solution can be a difficult task because the real life behavior of the system is hard to predict or model. In my case I have faced the simple question quite a few times: how much heat can a cooling system dissipate? The thermal resistance of a particular heatsink may vary quite a lot depending on the surroundings or it can simply be unknown to start with. The aluminum side wall of an enclosure made me build this thing.

This is why I have made this little device: a thermometer, a transistor and a microcontroller with a simple command line interface. I could have answered my questions in quite a lot of simpler ways, but since I made a simple thermometer not much else is needed to control the transistor when a DAC is available in the microcontroller.

The device works in a simple way: a specific power is dissipated on a transistor while a DS18s20 temperature sensor measures the temperature on the heatsink as close as possible to the transistor. The circuit uses a serial connection and is controlled via the terminal. A few preset values are available for the power to be dissipated.

The micro at the center of the project is an ATXMEGA32A4U and I am using a small board I designed for another project and another proto board which contains a current sensing resistor and a voltage divider to measure the supply. A TL431 is used as a 2.5V reference. The circuit uses two supplies, one for the micro which also contains a 3.3V LDO and one for the dissipating transistor. The schematic is shown below: 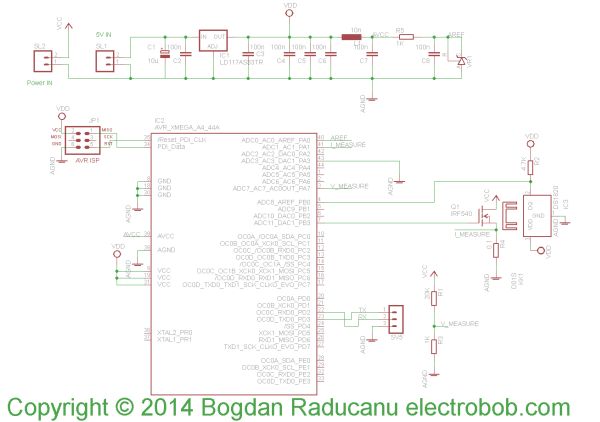 The reason for leaving the supplies separate was to be able to use a wide range of supplies for the dissipating transistor; the circuit is designed to measure up to 52V input. Such a supply is too high for a normal regulator for the micro. If the allowed maximum is lowered, a regulator can power the micro as well. In practice it turned out the low power levels (0.5 – 5W) are regulated better when a low voltage supply is used for the transistor (3V). For higher output power (5W to 50W) a 19V laptop power supply worked just fine. The limit simply comes from the ADC precision and the value of the current sensing resistor.

In this project we will show how to build WiFi controlled thermostat with ESP8266, Arduino and touch screen display. Thermostat...