In the kingdom of rock and roll it is important to set oneself apart. With millions of people in this world who can play the guitar, simply playing well is just not going to cut it. You need something extra to rise up as a rock god. Consider this guitar the mystical glowing ax bestowed upon you by the Rock Goddess of Bangs; The fabled ax that will lay waste to nonbelievers and shred through the aether with the transcendent glory of rock. With this weapon of unfathomable power, you will be an explosion of light and sound rising up above the writhing masses. 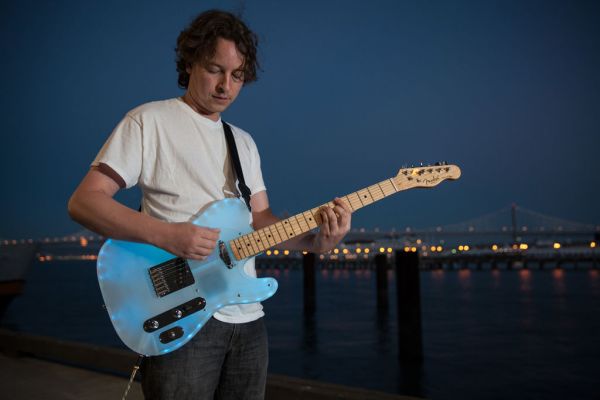 While there are a couple of other glowing guitars out there, this one by and large sets itself apart. For starters, it is frosted to diffuse the glow of the LEDs. This means that the whole body glows instead of being just edge-lit, and you can also see it during the daytime. The other unique feature of this guitar is that it responds to the music being played. The brightness is adjusted by the volume, and the color is controlled by the duration that it is being played. So, the harder you rock, the more colors you will see.

Wind down each of the tuning machine heads and remove all of the strings.

Step 3: Take of the Neck

Detach the neck from the body of the guitar by removing the four screws at the base of the neck.

Unscrew the control plate from the body of the guitar.

Make note of where the wires from the pickups and output jack are connecting to the controls.

Once you are sure you have a record of the wiring connections, cut the wires to free the control plate entirely from the guitar.

Remove the screws holding the bridge to the guitar body, and free it from the guitar.

In my case, one of the pickups came along with it. If you have a guitar in which the pickups are not attached to the bridge, remove the pickups seperately.

Remove the output jack from the guitar body.

Remove the screws holding the pickguard to the guitar body and any of the remaining pickups.

Unscrew both of the strap buttons from the body of the guitar.

The body should now have nothing attached to it.

Cut the LED strip into a 16″ and a 20″ section (or however long you deem appropriate for your guitar).

Using a router table, make one channel that runs between the strap button mounting holes that is 20″ long, by 0.25″ deep, by 0.6″ wide.

Next, make another channel that is 16″ long by 0.25″ deep by 0.6″ wide that starts at the edge of the audio jack mounting holes and runs the legnth of the bottom of the guitar.

These channels will hold the two LED strips. Thus, if your LED strip is longer, you will need longer channels.

Drill a 1/4″ diameter hole from the edge of the routed LED channel that is closest to the control comparment down on through the side of the guitar into the compartment itself.

Drill another 1/4″ hole from the back side of the guitar straight down until it intersects with the opposite edge of the same routed channel.

Drill a similar 1/4″ hole to meet the closest edge of the other routed channel.

In my case I found they fit upon the back side perfectly between the two pickup channels.

Using a straight edge clamped to the body of the guitar as a guide, follow along the perimeter of the tracing with a plunge router. This will require readjusting the guide for each face of the perimeter.

Once the perimeter is cut, route out all of the material that is remaining on its inside.

Route two straight channels that are approximately 1/4″ wide by 1/4″ deep from from each of the 1/4″ holes drilled in the back of the guitar to the electronics compartment. These channels will be used to route the wires connecting the two LED strips.

Pass the wires that have come out the back through the other 1/4″ hole into the other LED compartment.

Solder them to appropriate terminals on the other LED strip such that the two strips are wired in parallel.

Once you have the two strips, now comes the tricky part.

Using a heat gun, soften the strip and form it around the counter of the guitar. Epoxy and clamp the strip in place as you go, until it is clamped in the channel and neatly epoxied in place.

Wait for the epoxy to fully set and repeat this process with the opposite channel.

Of course, this is easier said than done and make take a few attempts go get right. One thing I encountered while doing this is that the clamps tend to slip, especially when there is wet epoxy around. I solved this by placing a few thing pieces of scrap wood over the acrylic and then clamping it. This provided just enough traction to keep it from slipping. However, be careful not to get too much epoxy on the wood or you will have an annoying time sanding this away later.

Using a 3/4″ diameter plunge router bit, cut a 1″ wide by 1″ deep channel for the power switch.

Flip the guitar over. Using the same bit, and at the same depth as the electronic compartment, make a notch off one edge large enough for a power charging jack to fit.

Getting Arduino data to a web Page

Being new to Arduino I was a bit overwhelmed by the different ways to do things. So this is what...