Comes with all the hardware and software you need to quickly get your FPGA project going. Now you can focus on the real engineering.

If we reach our $30,000 stretch goal, we will be able to hold a competition. We will ask backers who have a miniSpartan6+ to demonstrate a creative, innovative application. We will distribute $2,500+ in cash prizes, and winners will be chosen based on polling from social media and experts from academia and the industry.

When? The contest will be held 1 month after we deliver our boards ( if everything moves smoothly, in October 2014. 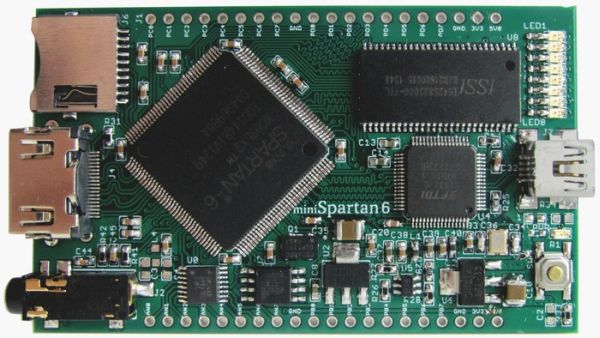 Where? All around the world – online. Build your project, document it, film it working, and you are in.

Guidelines? No conditions except using your miniSpartan6+ in your project.

Meet the miniSpartan6+ and the Scarab IDE:

When we came up with our board’s design, we looked at what was available in other boards on the market and enhanced it.

Our kit is small, much smaller than the closest thing on the market,it’s smaller than a credit card at only 1.8 in x 3.0 in. That means you can put it inside some pretty small projects. (Here’s something to get you thinking, by 2025 the cost of putting one pound into space is expected to be just $100.)

And our kit is bread board friendly, so you can quickly connect it to a shield or to a bread board.

Now, there’s a handful of other broads with many of these features on the market, but our

miniSpartan6+ costs around half of what its closest competitor does.

For more detail: Get Creative with the miniSpartan6+ : A Competition with $2500+ in cash prizes!!!

Touché is a capacitive-sensing technology, developed by Walt Disney Research, which aims at providing touch and gesture sensitivity to a...