A global economy brings many benefits, but it also makes international terrorism extremely difficult to combat. With more goods passing through the world’s shipping terminals and airports than ever before, hunting explosives with large, static detectors or teams of inspectors armed with detecting devices and reagents is a bottleneck that increases the chances of evasion. To help US counterterrorism efforts, GE has developed RFID stickers that act as wireless, battery-free explosives detectors that can be placed almost anywhere.

Based on previous GE research on self-contained RFID sensor tags, the new explosives detectors were developed by GE Global Research and partners in the US government and industry. Costing 5 to 50 US cents per sensor, depending on configuration, they’re designed to be cheap, ubiquitous, and easy to use.

Though inexpensive to produce, they have the ability to wirelessly detect and measure very low concentrations of explosives, oxidizers, and other chemicals in real-time. According to GE, they require no batteries; can operate continuously in areas with heavy, multiple sources of interference; and can be read with a device the size and portability of a mobile phone. 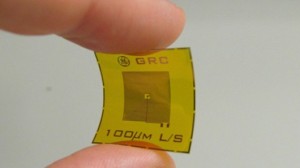 The sensors consist of a flexible substrate produced by roll-to-roll fabrication, with each sensor the size of a US penny. The sensor proper is made of a material that changes its electrical properties when an explosive or oxidizer is in the immediate vicinity. The tags can be stuck on cargo containers, packages, walls, and other surfaces, and when a contraband chemical is detected, the RFID sends a signal to an in-range handheld detector.

This is a clock designed to keep accurate time (independent of atomic or GPS), display local sunrise, sunset and solar...