Egads!  LED Goggles you can see through (surprisingly well, too)!  They pulse subtly, making them so cold and dehumanizing. They were totally perfect for the character I was going after – Mr Freeze.  It was my first time really playing with LEDs and Arduinos, so it was a good learning curve hugely aided by the wonderful Instructables community.  The biggest lesson here for me (as with virtually every project) was iterate, iterate, iterate!  I’ve skipped all that for this instructable though and I’ll show you the steps to the end product! 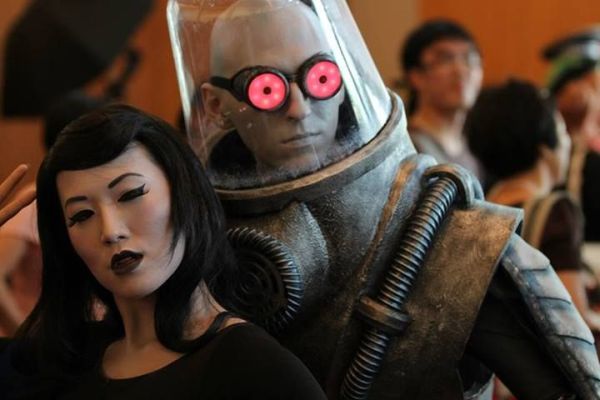 Don’t be scared – it’s actually pretty simple.  I started with some cheap welding goggles and added electronics from there.  One of the main challenges was to keep the light from the LEDs separated from the light from the outside world coming into my eye.  Here’s an explanation of the pieces of the cross-section from the front to the back. 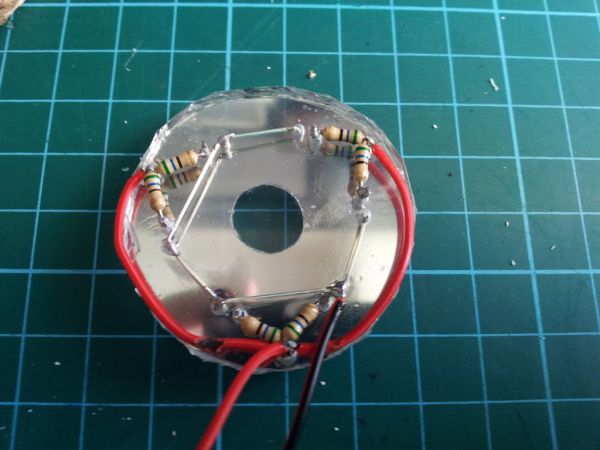 Here you see the LEDs in the mirrored acrylic with a hole cut through the mirror film for vision.  I traced the acrylic disc from the goggles’ lens and cut it out with an acrylic cutter (carefully snapping off a bit at a time) before measuring and drilling holes for LED leads and resistor connections.  I used the leads from the LEDs and resistors themselves to complete the circuits around the center for the positive sides of the LEDs and extended with small wires around the edges for the negative side.  I originally planned for a 3V source (2xAAs) and these six red LEDs are rated at 2V and 20mA, so I used a 56ohm Resistor for each one and wired everything in parallel – every LED on a lens is in parallel and the lenses are parallel to one-another.  I’m still getting the hang of LEDs, so I used LED Wizard to double-check my math.

As shown in the design cross-section, the LED lens is just popped into the frame behind the glass lens, LEDs facing front. Afterwards I wired the two lenses together and covered them with a bit of foam for protection.

I wanted to make sure to fuzz the LEDs out to have more of a lit-lens look than a six-points-of-light look (technical terms, eh?).  In front of the LEDs I put a disc of cut plastic to help disperse the light and add a bit of a crystaline pattern.  The cut pattern is facing the LEDs and shows only a flat front when the LEDs are off.  On top of this is a flat glass disc/lens to make sure the whole lens assembly is glossy and flat from the outside.

After tests, I wanted to add a pulsing effect.  Earlier in the year I bought a Makey Makey (for this purpose, an Arduino Leonard), so it was time to learn to program an arduino!

First off, I needed to remember that I built the circuits for 3V whereas my arduino outputs 5V.  I was running into a time crunch, so to make up the difference, I just added an extra 2V LED to the circuit in series with the whole parallel circuit.  It’s not actually lighting anything, but it essentially drops the voltage back down to 3V by sucking up 2V out of the 5V.

The sketch was pretty basic.  Mostly it was adapted from the example LED Fade sketch to suit my board and be as bright and slow as I wanted.  See below:
/*

This example shows how to fade an LED on pin 3 using the analogWrite() function.

// the setup routine runs once when you press reset:

// the loop routine runs over and over again forever:

// change the brightness for next time through the loop:

// reverse the direction of the fading at the ends of the fade:

// wait for 30 milliseconds to see the dimming effect

In this instructable, I'm going to show you how to make a simple circuit/code with an arduino, which will make...