In this instructable, I’m going to show you how to make a simple circuit/code with an arduino, which will make an LED connected to it flash from off to on, with 1-second intervals, as shown below.
This is a very easy, basic idea, however it leads to many more complicated codes and circuits. 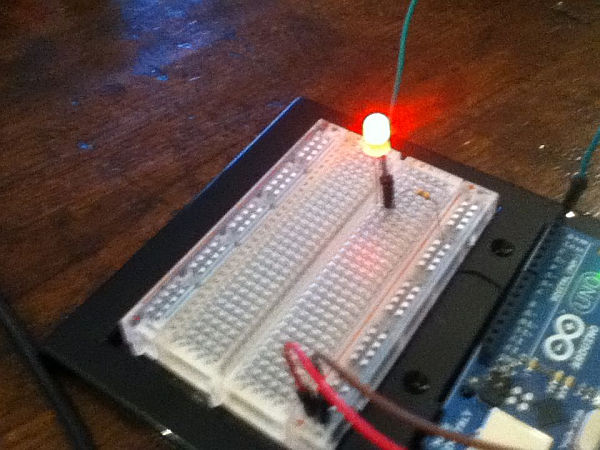 Attaching the Power Cables and resistor to the Breadboard

Attach the control wire to the Breadboard

Attach a wire from digital port ‘0’ on your Arduino to the hole directly above the resistor.

Now to attach the Led into the circuit. Be warned, it will NOT do anything until you have uploaded the code to the board, which is done at a later stage.
the way this is done is to put it so that each pin is next to a wire/resistor. This sounds unclear, but pictures should help
You have to put the LONGER pin next to the wire connected to the port, and the shorter pin next to the resistor.

Now you need to plug the arduino board into the computer. Nothing really to say here, just make sure that you don’t break anything!