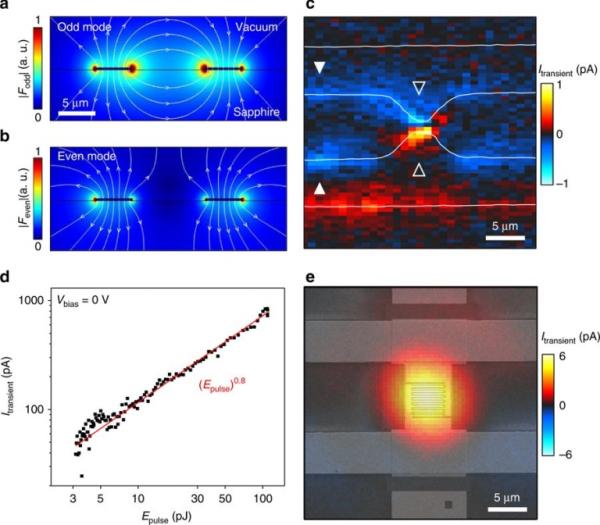 A team led by the Technical University of Munich (TUM) physicists Alexander Holleitner and Reinhard Kienberger has found success for the first time in generating ultrashort electric pulses on a chip. They made this possible by using asymmetric metal antennas only a few nanometers in dimension, then running the signals a few millimeters above the surface and receiving them in a controlled way. 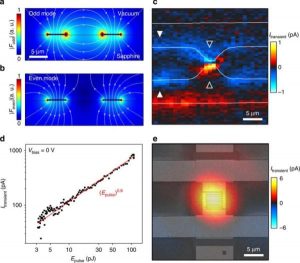 Traditional electronics allow frequencies up to around 100 GHz. Optoelectronics can produce electric pulses at 10 THz range by applying electromagnetic phenomenon. The range in between them is referred as the terahertz gap, since components for signal generation, conversion, and detection have been remarkably difficult to achieve.

The TUM physicists succeeded in generating electric pulses in the frequency range up to 10 THz using tiny, so-called plasmonic antennas and run them over a chip. Researchers call the antennas plasmonic because of their shape, they amplify the light intensity at the metal surfaces. The shape of these plasmonic antennas is very important. They are asymmetrical in shape. One side of the nanometer-sized metal structures is more pointed than the other. When a lens-focused laser pulse excites the antennas, they emit more electrons on their pointed side than on the opposite flat ones. An electric current flows between the contacts — but only as long as the antennas are excited with the laser light.

In photoemission, the light pulse causes electrons to be emitted from the metal into the vacuum,

All the lighting effects are stronger on the sharp side, including the photoemission that we use to generate a small amount of current. The light pulses were present in only a few femtoseconds.

In this post, we will talk about Retro-LED-Strip-Audio-Visualizer: As a musician and electrical engineering student, I love any project that...