What is seeing without feeling? The field of Virtual Reality has recently been gaining much attention, with the Oculus Rift and Google Cardboard paving the path of visualizing a world that is not physically there. But what if the virtual reality experience could be enhanced by incorporating tactile sensing? The Haptic Glove we developed accomplishes just that – without seeing the physical structure of the object, you will still be able to feel the presence of virtual objects.

The goal of the project is to create an exoskeleton on the forearm arm that provides tactile perception for the user. The volume of the virtual object will be emulated based on the intensity of a light source that is placed inside a black box. Depending on the relative brightness of the source to the phototransistors that are mounted onto the exoskeleton, a distance between the user’s hand and the light source can be determined. By varying the brightness of the LED light source, the size of the virtual object will vary. To provide the tactile perception, servos mounted on the exoskeleton provides a pulling force, preventing the user’s fingers from reaching closer to the light source. In addition to the resistive force that act against the fingers’ movement, there are also flat surfaces at the tips of the exoskeleton that will flip up to make contact with the user’s fingers, which actually provides the sense of touching a real object. 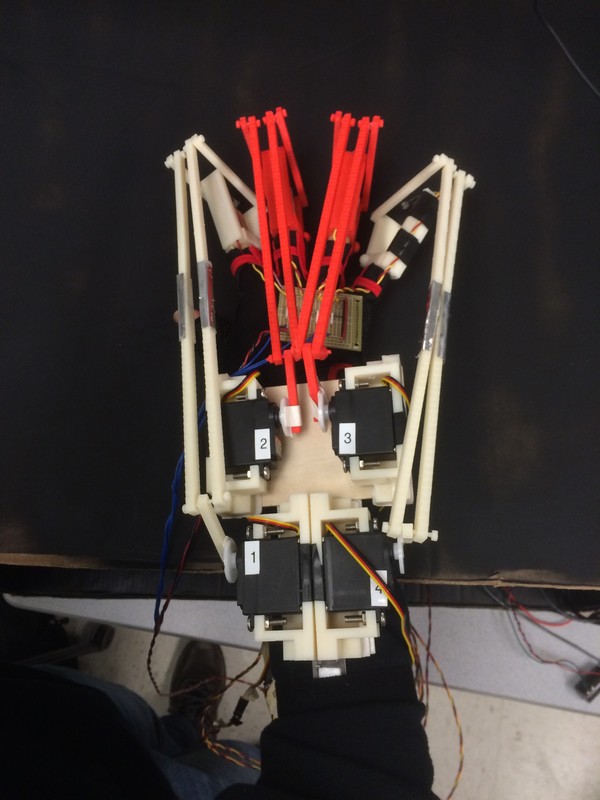 Rationale and Source of Our Project Idea

Although the technology of haptic feedback has already been developed, it is not a very prominent piece of technology that is being used today. As the market for virtual reality expands and the applications surpass the entertainment realm, we developed our project ‘Virtual Object Grabber’ with the hopes of providing prospective users with an even more immersive virtual reality experience that encompasses the tactile sensory perception.

In order to implement a natural interaction with the exoskeleton and the virtual object, we performed a simple mapping of light intensity measured to the distance from the light source. As expected, an exponential decay was observed due to the fact that intensity is inversely proportional to the square of the distance. The exponential decay function was expressed in log and multiplied by scaling factor to obtain a desired linear relationship between light intensity measured and actual distance from the light source.

For more detail : Feeling the light in a whole new way