The EyeWriter is a low-cost eye-tracking apparatus + custom software that allows graffiti writers and artists with paralysis resulting from Amyotrophic Lateral Sclerosis to draw using only their eyes.

The original design, as shown here, featured a pair of glasses as the basis for the eyewriter design:

Since that first video, we’ve been hacking on and developing the project, and we have a new design, which we’ve called “eyewriter 2.0” which improves the accuracy of the device, and allow for people who’s heads are moving slightly to also use an eye tracker. The original eyewriter, designed for a paralyzed Graffiti artist TEMPT1, is designed to be worn on a completely motionless head. The 2.0 design, which uses a camera and LED system mounted away from the head, can be used by people whose heads are moving slightly, such as MS patients, and people who wear glasses, etc.
This eyewriter system is cheap, and completely open source.  At the moment, it costs about 200$ in parts.  Traditional commercial eye trackers costs between $9000-$20,000, so this is a magnitude of order cheaper, and is designed to help anyone who wants or needs an eyetracker. 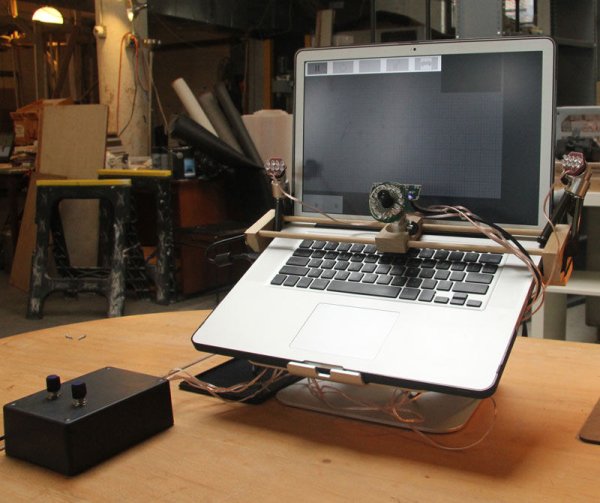 This fall, we’ve been showing off and demoing the 2.0 device — check out the eyewriter 2.0 in action —  we even hooked it up to a robotic arm, to draw the artwork people make with their eyes:
http://www.switched.com/2010/12/13/eyewriter-teams-up-with-robotagger-to-print-kids-ocular-artwork/print/
(The 2.0 device was designed with help and input from Takayuki Ito, Kyle McDonald, Golan Levin and students of the eyewriter collab at Parsons MFADT.  Thanks also to the Studio for Creative Inquiry / CMU for hosting a session for development)

The basic idea approach is that we’ll be doing a few things. First, we’ll be making LED illuminators for the sides of the screen and the center. Second, we’ll be hacking the PS3 eye camera to get the vertical sync (when the frame of video is being taken) and to make it sensative to IR. Third, we’ll be programming and building the arduino / cirucit to control the blinking. Finally, we’ll setup the base for the system and go through the basics of the software.From a technical perspective, the 2.0 system works by strobing 3 IR illuminators every frame. On even frames, it uses the center illuminator (located around the camera lens) and on odd frames it uses the 2 side illuminators. On even frames, the pupil appears bright, since the IR light is actually bouncing off the back of your eye, like red eye effect. On odd frames, your pupil appears dark. The difference between the two allows us to isolate and track the pupil in realtime. Additionally, the glints (reflections of the IR illuminators) of the dark frame are tracked, and these, plus the info on the pupil, is calibrated to screen position using a least squares fitting process for an equation that provides a mapping of glint/pupil position to screen position.

to begin with, we will need a fair number of parts to make this 2.0 device. Please see this image to get a sense of what we will be working with, as well as this detailed parts list pdf
see parts image
download detailed parts list:

The Eyewriter 2.0 requires a few pieces of software for building and running. In this step we will explain how to download and install an IDE, openFrameworks, and the eyeWriter software.
A. Integrated Development Environment (IDE)

We will also need to install two additional pieces of hardware. Macam will allow our PS3 eye camera to talk to our computer and the Arduino software will permit our physical hardware to communicate with our software.Installing PS Eye drivers

In this step you will have to load the Arduino sketch for the PS eye camera to work.A. Arduino Sketch (Only for PS Eye)

In this step we will talk about how to take apart a PS Eye camera. This is necessary for you to be able to replace the lens on the camera, insert a infrared filter and wire the v-sync. 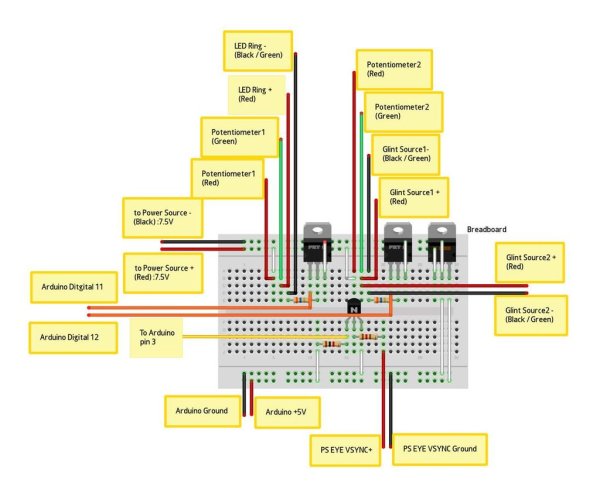 In this step we will talk about how to put your camera back into one piece.

For more detail: The EyeWriter 2.0

Are you familiar with Internet of (every) Things?

Internet is “good   For more detail: Are you familiar with Internet of (every) Things?