The wearables market is booming. Statistics aggregator web portal Statista, notes that the global market will be worth over $7 billion this year and $12.6 billion by 2018.

Although the potential rewards are high, this is not an easy market to enter. Designing smart watches or fitness bracelets is tough; consumers expect lots of functionality, smartphone connectivity, compact form-factor, light weight, and long battery life. The introduction of highly integrated, ultra-low-power microprocessors and wireless chips has eased the design process, but squeezing out all of the battery’s power remains key to a wearable product’s success. 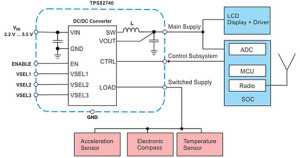 Wearables have sprung to the fore because of the convergence of three key technologies1. Ultra-low-power chips that can run from watch batteries allow companies to offer compact products which, thanks to smartphone-compatible wireless technology such as Bluetooth Smart (also known as Bluetooth low energy), communicate seamlessly with smartphones and tablets. A range of inexpensive apps presents the information gleaned from the wearable in a user-friendly format indicating, for example, how long the user needs to exercise to lose weight. A recent leading-edge wearable is adidas’ Fit Smart wristband tracker which incorporates Bluetooth Smart technology from Nordic Semiconductor (Figure 1).

Products such as the Fit Smart combine multiple facets of engineering including advanced electronics such as 32-bit MCUs, 2.4 GHz silicon radios, analog-to-digital converters (ADC), and display drivers. In addition, a wearable could incorporate several sensors measuring atmospheric pressure, humidity, temperature, and acceleration. The capability of the MCU significantly affects the performance of the device and determines its market appeal; the MCU also often integrates other elements of the wearable’s electronics such as the Bluetooth Smart radio and the ADC. However, that’s not the whole story.