The new version of Eagle is on out! The biggest changes coming are a new design feature and an improved autorouter. We are both veterans of Eagle and PCB board design so this blog is intended as both a review and a tutorial of the new features that Eagle v7 brings. Let’s dive right in.

To make the design process more real, we decided to design a circuit from scratch. A simple circuit that Sophi has worked with is one that uses an audio signal to control a hobby servo, which could be used to control an animatronic. It’s a little early for Halloween, but Sophi had used this circuit before and planed on using it again in October. Many thanks to Scary Terry who gave us permission to use his design. 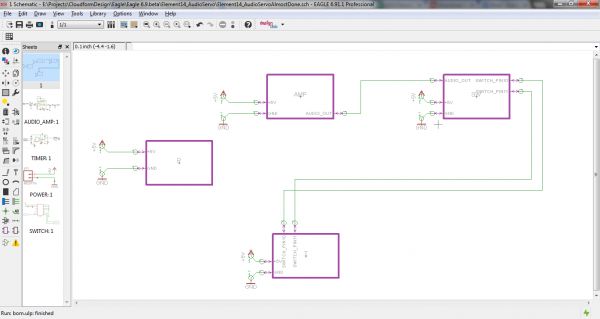 The first thing we did was use the new Hierarchical design feature. This allows you to put the schematic into modules, where each module takes up its own sheet.

Putting the schematic into modules is definitely an improvement over past design possibilities – especially for collaboration and replication. We couldn’t figure out a very efficient way to collaborate (we tried GitHub but it didn’t work very well), and a requested feature would be a way for people to “merge” changes to modules. However, the module layout makes everything look very clean and gives you a good idea of the “big signals” — i.e. the  busses and wires that are going to have to travel longer distances across the board:

Immediately you can see that the UI on the left has a new look. It is laid out in the same order as Eagle always has been, however the symbols look more modern and (for new users) recognizable.

One thing that could be improved upon is that the module names are brought in along with the component name such as TIMER:R5 for a resistor in the TIMER module. This gives you very long names in your silkscreen, which can be annoying for even a board with such spread out components. To take care of this, we ended up shortening the names of the modules and deleting the names of all of the resistors and capacitors. We are unsure of what a good solution to this issue is. Perhaps module names could be on a separate layer so that the layer could be hidden if desired.

I’ve read through a lot of tutorials online to make an Arduino Clone on a breadboard, and some of them...