The Meteor-M N2 is a polar orbiting Russian weather satellite that was launched on July 8, 2014. Its main missions are weather forecasting, climate change monitoring, sea water monitoring/forecasting and space weather analysis/prediction. Meteor-M N2  transmits images using the digital LRPT protocol at around 137.1 MHz with can be received with an RTL-SDR. The chipset of RTL dongles was created with the intention of doing DVB-T (digital TV) and DAB (digital radio) demodulation , however a curious linux developer named Antti Palosaari, discovered that these cheap TV adapters are actually Sofware Defined Radios (SDR)! 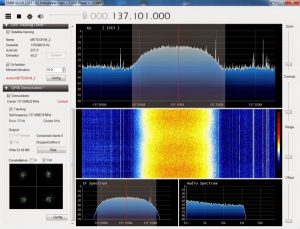 If you don’t have experience with SDR or SDR# software  you can take a look at my RTL-SDR analog receiver tutorial. These receiver dongles used to sell for $20, but are now going for around $15, for most cases R820T unit is the better choice. You will need a 137 Mhz antenna check plan for the easy to produce V-Dipole by Adam-9A4QV or a  DIY Quadrafilar Helix Antenna. But trust me this signal from space is powerful and almost any 2m band (144 Mhz) or 2m/70 cm dual band ham radio antenna will work good enough.

The satellite is currently active with a Low Resolution Picture Transmission (LRPT) signal which broadcasts live weather satellite images, similar to the 137 Mhz APT images produced by the US NOAA satellites. LRPT images are however much better as they are transmitted as a digital signal with an image resolution 12 times greater than the aging analog US NOAA APT signals. NOAA satellite images are grainy black and white and the color is artificial and added by the processing software. Thanks to the work of Oleg Bekrenev we now have a QPSK demodulator plugin for SDR# that allows the real time reception and decoding of Meteor-M2 LRPT images. The demodulator works very good even with weak signals, it’s capable of decode image with SNR > 5-6. Thanks to that you can receive satellite images with suboptimal antennas.

READ  Arduino playing the melody with the Sd card

Radio enthusiast Happysat has come forth with a complete PDF tutorial which can be downloaded here . The basic steps involve setting up Orbitron tracking software and the DDE plugin to automatically track the Meteor-M2 LRPT satellite and signal, and then setting up the QPSK plugin and the new version of Lrptdecoder to talk to one another in real time via a local TCP connection. You could also check Raydel Abreu offline method tutorial or the impresive IZ5RZR step-by-step video at the end of this blog post!

Arduino is a perfect mindless slave. Give it a job and it performs the task endlessly without defaulting even for...