A few years ago, I was engineering a new product and trying to log the temperature at multiple points within my device. I found myself needing a device that could log several temperatures at the same time, for many hours, and could work reliably without me needing to keep a close eye on it.

But, when I looked around for something to meet my needs, the options were slim: I could spend close to a thousand dollars on a very expensive, proprietary lab instrument with limited capabilities, or I could spend my time rather than my money and create a specialized system using an Arduino™.

So, with help from a few friends, I set out to solve this problem by creating an easy-to-use “plug and play” device that’s more than accurate enough for most purposes, yet still has the flexibility of an open system. After many months of careful designing, I’m thrilled to introduce the result of our efforts: the T400 Temperature Datalogger!

The T400 comes ready to use out of the box with everything you need to track and record the temperature of a solid, liquid or gas: just plug in one of the provided thermocouples and turn it on. You can read the temperature measurements directly on the T400’s LCD screen. 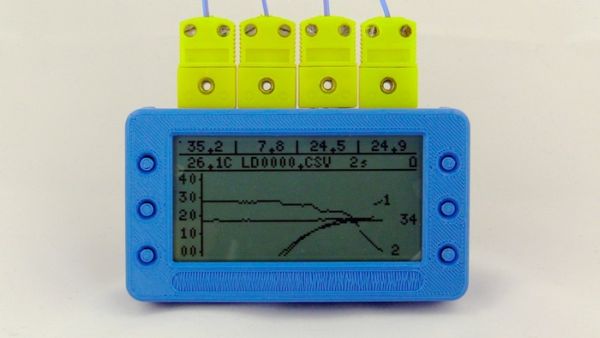 The T400 can stream live data to your computer via USB. But don’t worry about connecting the T400 to another device: all of the data is logged directly to a MicroSD card, so it works independently of other devices. The long battery life on the T400 means that you can set it up, walk away, and come back when that work is done, all of your recorded data will stay safe and sound on the SD card.

The high-level features of the T400 are listed below. If you would like a detailed look under the hood, visit the T400 source files on Github.

This instructable assumes very little with respect to prior knowledge. If there are any areas you feel could be improved...