Getting into the Guinness Book of World Records isn’t just about who can eat the most hotdogs or fly a paper airplane the highest. Sometimes it involves technological breakthroughs with huge potential. Guinness has handed DARPA’s Terahertz Electronics program the award for the fastest solid-state amplifier integrated circuit. Developed by Northrop Grumman, the Terahertz Monolithic Integrated Circuit (TMIC) is a ten-stage common-source amplifier that cranks speeds of one terahertz (1012 Hz), or one trillion cycles per second.

DARPA argues that the current state of electronics must move beyond speeds of 300 gigahertz and wavelengths of less than a millimeter if it is to meet the needs of the next generation of imaging, radar, spectroscopy, and communications technology. 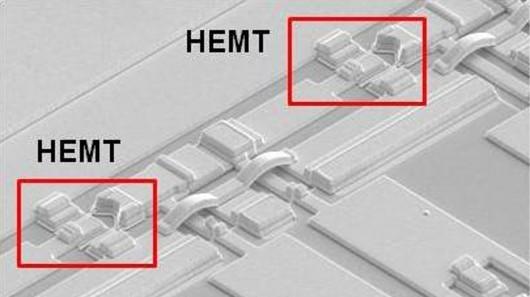 It’s all a matter of gain – a measurement of the ability of an electrical circuit to increase the power of a signal between the input and the output, measured in logarithmic decibel (dB) units. The TMIC is based on work done by DARPA’s HiFIVE, SWIFT and TFAST programs and is capable of speeds 150 billion cycles faster than the previous record set in 2012 of 850 gigahertz. It has power gains that are several orders of magnitude greater than previous circuits with a gain of nine decibels at 1.0 terahertz (THz) and 10 decibels at 1.03 THz. In comparison, a smartphone can only manage 2 GHz.

“Gains of six decibels or more start to move this research from the laboratory bench to practical applications — nine decibels of gain is unheard of at terahertz frequencies” says Dev Palmer, DARPA program manager. “This opens up new possibilities for building terahertz radio circuits.”