Charlieplexing LEDs with an Arduino

Charlieplexing is an ingenius method for controlling many LEDs without using many microcontroller pins. You can turn on or off one LED at a time. To light more than one LED at a time, you can scan the LEDs by turning a sequence of them on and off really fast. The number of LEDs you can control is determined by this formula: N pins * (N pins – 1). For example, if you have 4 pins, you can control 12 LEDs (4 pins * 3 pins). If you have 2 pins, you can control two LEDs, which makes it a little silly to employ Charlieplexing, since you could simply connect each LED to an MCU pin and then to ground. Charlieplexing makes more sense for more than two LEDs. Nine pins will get you 72 LEDs! 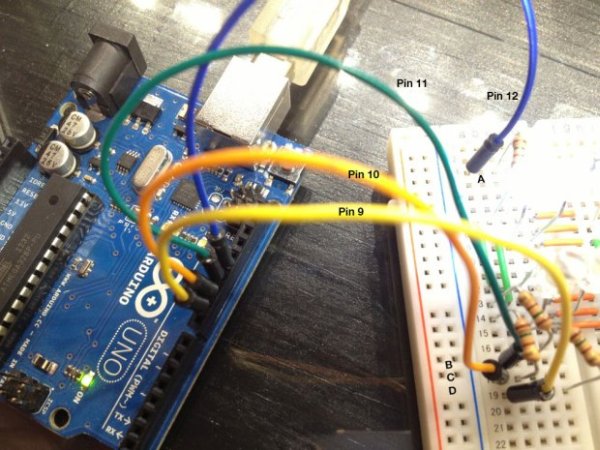 Charlieplexing takes advantage of the fact that LEDs are diodes: Current flows in only one direction through an LED. Connect two LEDs in parallel with each but with opposite polarity so that only one conducts (lights up) at a time and that is the basis of Charlieplexing.

The ATmega328 pins can source upwards of 40 mA. The grand total of current from Vcc to GND in an ATmega328, however, is capped at 200 mA. Keep that in mind when pumping electrons through your Arduino or ATmega328. In this project, we’ll only ever have a single LED turned on at a time, so no more than roughly 20 mA will be running through the microcontroller’s pins at any time (not including what the MCU takes itself, of course).

In this project, we’ll set up a simple Charlieplexing circuit with 12 LEDs controlled by an Arduino that will look like this:

For more detail: Charlieplexing LEDs with an Arduino

If you can’t explore the Moon or Mars … you can always explore your neighborhood! The main goal of this...