My 68K breadboard computer is alive! It’s always a thrill when a pile of random chips does something recognizably computer-ish for the first time. Blinking some LEDs in sequence is great; running BASIC is super extra great. I’m excited.

This simple breadboard machine is a prototype of the 68000 single board computer I plan to build next. By testing the key design ideas in a breadboard prototype, I hope to uncover any lurking design problems while they’re still easy to find and fix. Once the design is committed to a PCB with lots of tiny surface-mount components, it will be much more difficult to make changes. Even probing specific signals to observe what’s happening may be difficult. The breadboard is a much more forgiving place to experiment and learn.

Compared to my plans for the final 68000 machine, this breadboard version has less memory, a lower clock speed, a narrower data bus, fewer peripherals, no interrupts, and glue logic built from discrete chips instead of a CPLD or FPGA. Except for the serial interface, the whole thing was built entirely from parts I had on hand. The specs are:

The computer doesn’t use interrupts – it always runs at the highest interrupt level, and polls the serial port when it needs input. It also doesn’t use any of the CPU’s DMA or legacy 6800 peripheral support. There’s no handshaking for memory accesses either. The /DTACK signal that devices are supposed to use to indicate a successful memory transfer is just hard-wired to ground – the so-called DTACK Grounded approach to system design. 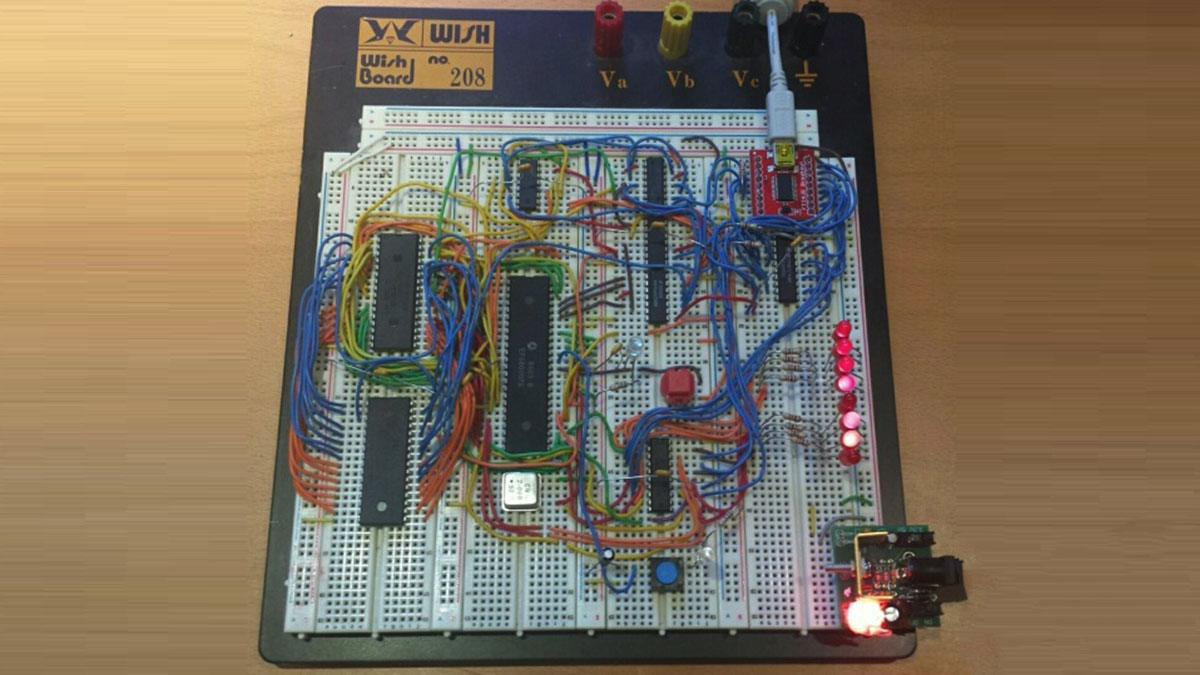 Getting the machine up and running went surprisingly smoothly, and only took six days of occasional work. The biggest challenges were the hidden 250 mA PTC fuse in my power supply, and noise in the /RESET signal. Other than that, it was just a matter of placing all the chips on the breadboard and stringing a few hundred wires to connect them.

It was tedious work to perform all the address decoding with discrete logic instead of a CPLD. It’s so nice to type a Verilog equation like /CS = A19 * A18 * /AS * (/F0 + /F1 + /F2), and so annoying to wire up the equivalent equation from a bunch of individual AND, OR, and NAND gates. I quickly ran out of gates, and wasn’t able to decode the address space as fully as I’d hoped, or cover all the reset-related edge cases. It gave me new respect for how useful even a tiny CPLD can be for consolidating glue logic.

The first test programs were written using the Easy 68K editor and assembler. It was a huge help to run the programs in the Easy 68K simulator, to make sure they worked as intended before trying them on my hardware. There’s nothing worse than staring at a non-functional DIY computer with no way to tell if you’ve got a software bug or a hardware one.

Easy 68K assembles programs into Motorola S-record files, which I opened with my EPROM burner software, and programmed into my Flash ROM. That was all I needed to get some basic LED blinker programs going. Physically moving the Flash ROM chip back and forth between the breadboard and the EPROM burner wasn’t much fun, though, so I wrote a quick and dirty bootloader. The bootloader is stored in ROM, and runs when the computer is first turned on, waiting for data to appear at the serial port. The first four incoming bytes define the size of the transfer, then the remaining data bytes are stored sequentially starting at the RAM base address. After the last byte is transferred, the bootloader jumps to the RAM base address to execute the program that was loaded. It’s not fancy – there’s no acknowledgement, or checksums, or facility for alternate load or start addresses. But it’s enough to experiment with new programs without having to unplug the ROM chip each time.

Once I had a working bootloader, I started searching for 68000 software that could be easily ported to this hardware. Lee Davison’s Enhanced Basic for 68000 is well known for being excellent in this respect. All that’s needed is to change a few assembler definitions for RAM base address and size, and to provide implementations for the routines to get or print a character. The rest is just vanilla 68000 assembly code with no platform dependencies. Unfortunately it appears that Lee Davison passed away recently, and his web site is gone. I wasn’t able to find an original version of Enhanced Basic anywhere. In the end, I used an Easy 68K specific version of Enhanced Basic, then ripped out all the Easy 68K specific parts. It took me a while to discover some Easy 68K specific modifications that had been made to the “platform independent” part of the code (naughty, naughty), but it still only took a few hours to get Enhanced Basic up and running on the breadboard hardware.

For more detail: Breadboarding the 68K