This is an arduino controlled project and uses leds, jumper wires, and a breadboard. This is one of my first attempts on programming arduino and I am pleased with the outcome. I’m ten years old and I just started programming 2 weeks ago. 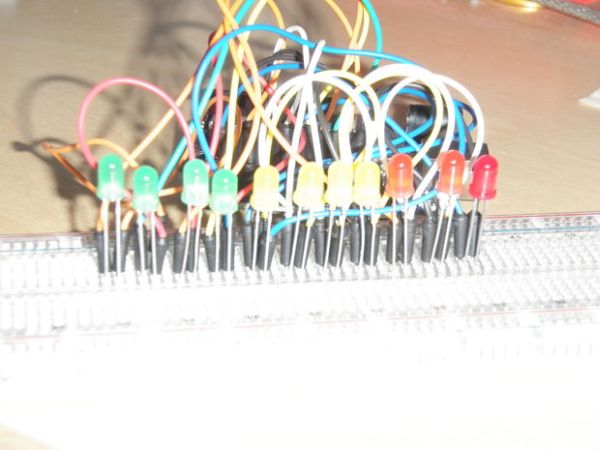 Let’s make sure we have all the correct parts. We need a large breadboard, 4 green LEDs, 4 yellow LEDs, 3 red LEDs, an arduino, and  about 25 jumper wires.  The arduino I used was the UNO smd, but it might work with older or newer versions also.

Step 2: Placing the LEDs on the breadboard

Next, let’s place the LED’s on the breadboard.  Make sure to put the long side of the LED (positive side) to the left on every one.  The order that you put them is 4 green, 4 yellow, and then 3 red. Put 1 pin spacing inbetween each LED. 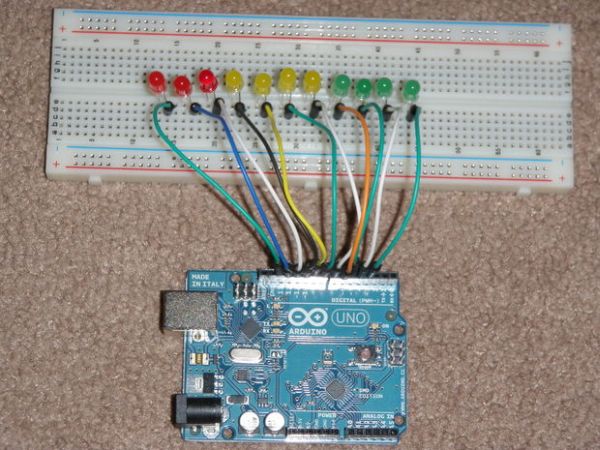 Now, we are going to wire the positive side on the LEDs to the digital pins on the arduino.  For this we will take a  jumper wire and put it at the pin above the left side of the first green LED and connect the other side to digital pin 3.  We will do the same for the second green LED at digital pin 4 and so forth and so on.

Note : I switched Arduinos for the photo.

Measuring Heart Rate With A Piezo

While trying to create a circuit that detects whether water is flowing through a pipe by measuring the vibration with...