This Arduino-powered vocal effects box pitch shifts and distorts incoming audio signals to produce a wide variety of vocal effects.  This project is my first experiment with real-time digital signal processing using Arduino.  It samples an incoming microphone signal at a rate of about 40kHz, manipulates the audio digitally, and then outputs 8 bit audio at 40kHz.  To minimize the amount of computation required by the Arduino, I used a technique called granular synthesis to manipulate the incoming audio signal.  Essentially, as audio comes into the Arduino it gets cut up and stored as small (millisecond or microsecond sized) samples called “grains.”  These grains are then individually manipulated and played back; they may be lengthened or shortened, stretched or compressed, played back in reverse, copied several times, or mixed with other grains.  You can hear a (somewhat creepy) audio sample from the effects box below: 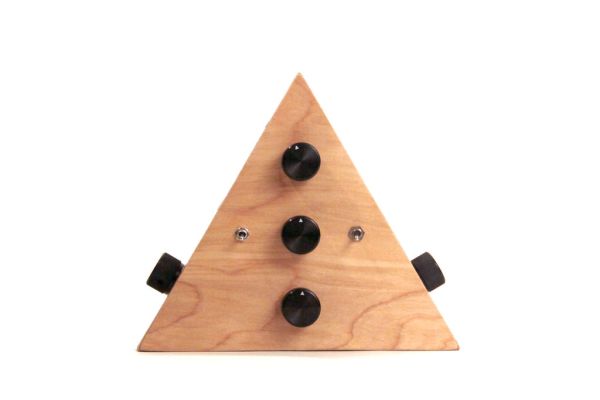 Granular synthesis creates a unique type of distortion caused by discontinuities between individual grains in the outgoing signal.  Sometimes this distortion creates an effect I can only describe as a “ripping” sound, other times it introduces new frequencies into the audio that were not present before.  Here is an example by Aphex Twin, the granular synthesis is especially prominent in the bridge at around 3min in. Another example of granular synthesis, this time applied to vocals for pitch shifting and textural effects, is from Paul Lansky.  My favorite thing to do with this effects box is to use subtle pitch shifting to achieve an androgynous vocal sound, I got the idea for the project after listening to copious amounts of Fever Ray this past winter, you can hear how she pitch shifts her voice to sound somewhat masculine at times.

I’ve broken the schematic into three parts so it is easier to understand.

The first schematic shows the audio out circuit. This project outputs audio through an 8 bit R2R digital to analog converter through Arduino digital pins 0-7.  This signal is sent through an amplifier, a low pass filter, and a volume control pot before being sent out to speakers.

The second schematic shows the mic input circuit.  The line in the from the mic is sent through an amplifier and a DC offset circuit before being sent into the Arduino via analog input pin A0.

The third schematic shows how all the controls of the effects box are connected to the Arduino.  There are two LED indicators in this project: one clipping indicator and one output indicator.  Three pots on the device control grain size, pitch, and wet/dry mix and a switch controls the direction of sample playback (forward or reverse).

Solder header pins to your protoboard so that you can snap the arduino directly to the board.  Unfortunately the spacing between digital pins 7 and 8 on the arduino is not the standard 2.54mm, so I’ve found that it’s best to try to avoid using these pins if possible (anolog pins can also be used as digital I/O).  If you have to use them, try finding long header pins which you can bend into shape (fig 4- from another project).

Solder eight 20kOhm resistors to arduino pins D0-D7 as shown in the images above.

Solder seven 10kOhm resistors in between each of the 20kOhm’s you just soldered.  Add an additional 20kOhm resistor to the 20kOhm connected to arduino D0 (the bottom of the ladder).

I am a big fun of TV series! Mainly I like Sitcoms and Sci-Fi genders but due to time constrains...