Or, an exercise in input and output multiplexing, and working with bits.  And a submission for the Arduino contest.

This is an implementation of a tic tac toe game using a 3×3 array of bicoloured LEDs for a display, a simple resistive touchpad, and an Arduino to tie everything together.

Parts and consumables
One perf board (or strip board)
Nine bicoloured LEDs, common cathode
Nine identical resistors, in the 100-220 ohm range
Six identical resistors, in the 10kohm – 500kohm range
One single pole, double throw switch
A bunch of header pins
A bunch of electrical wire
One small square sheet of transparent acrylic, ~ 1 mm thick, 8 cm on the side
Clear sticky tape
Heatshrinks (optional)

All of the above are quite common items, total cost should not exceed USD$20.

Everything Arduino related can be found at http://www.arduino.cc.

On with the build! 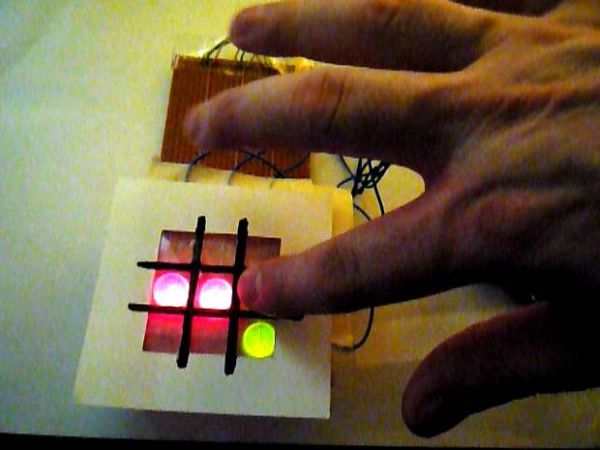 Step 1: Wiring up the LED matrix

For an LED to light, both its leads must be connected.  If we were to dedicate a pair of pins to each of the 18 LEDs (9 red, 9 green), we’d quickly run out of pins on the Arduino.  However, with multiplexing, we’ll be able to address all the LEDs with merely 9 pins!

By setting a particular anode line high, and a particular cathode line low, and having a high impedance on all the other anode and cathode lines, we can select which LED we want lit up, as there is only one possible path the current can take.

For instance, in the second figure, setting the green anode 1 line high, and the cathode 1 line low, the bottom left green LED lights up.  The current path in this case is shown in blue.

But what if you want to light up more than one LED on different lines?  We’ll use persistence of vision to achieve this.  By selecting pairs of LED lines very very quickly, it gives the illusion that all the selected LEDs are lit at the same time.

The circuit diagram below shows how the LEDs are physically wired up (G1-G9: green LEDs, R1-R9: red LEDs).  This diagram is for single red and green LEDs, if you are using bicoloured common cathode red/green LEDs, there’s only one cathode leg per red/green pair that you have to wire up.

Each of the cathode and anode lines have 100 ohm resistors for protection.

For the tic tac toe code, we’ll need to be able to store the following information about the LEDs:
– whether an LED is lit or not
– if lit, whether it’s red or green

One way of doing this is to store the state in a 9-cell array, using three digits to represent the state (0 = off, 1 = red on, 2 = green on).  Everytime we need to check on the states of the LED, for example, to check if there’s a win condition, we’ll need to cycle through the array.  This is a workable method, but rather clunky.

Here’s a worked example.  Let’s say we draw our tic tac toe grid graphically, and first use 1s and 0s to represent the on-off status (1 is on, 0 is off):

If we enumerate the cells from the bottom left, we can write the above representations as a series of bits.  In the first case, that would be 100000000, and in the second case, it would be 001010100.  If we think of these as binary representations, then each series of bits can be condensed into a single number (256 in the first case, 84 in the second case).  So instead of using an array to store the state of the matrix, we can just use a single number!

Note that we’re filling the matrix backwards – we start with cell 9, then proceed back down to cell 1.

Also, the on-off and colour states are stored as an unsigned integer type (word) instead of a signed integer type.  That’s because in bit shifting, if we’re not careful, we might inadvertenly change the sign of the variable.

Attached is the code for lighting up the LED matrix. 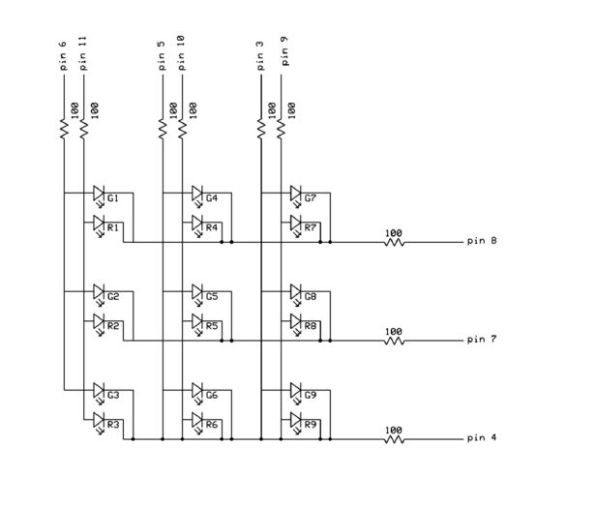 The touchpad is constructed from a sheet of thin acrylic, large enough to overlay over the LED matrix.  Then, tape down the row and column wires onto the acrylic sheet, using clear tape.  Clear tape is also used as the insulating spacer between the wires, at the intersections.

Be sure to use clean tools, to prevent finger grease from getting onto the sticky side of the tape.  Fingerprint stains not only look ugly, but make the tape less sticky.

Trim off one end of each of the lines, and solder the other end to a longer wire.  Solder a resistor in-line with the wires, before soldering on connectors.  The resistors used here are 674k, but any value between 10k and 1M should be fine.