Here is the list of our top 5 arduino simulators.

Launched in 2005, the Arduino open hardware and software platform has grown to be very popular among hobbyists, educators, and professionals alike, gaining momentum especially in the robotics field. Backed by a massive online community, and with most development boards and hardware accessories available at very low prices, this platform is perhaps the best place to start in working with embedded devices. But what if you want to learn programming and do not own an Arduino board, or are overwhelmed by the selection of hardware out there? This is where simulation software comes in.

Virtual Breadboard for Arduino is a learning App designed to help you take the first steps in the exciting world of physical computing with the Arduino microcontroller and ‘Breadboard’ based electronic circuit models.

Screenshot for this Arduino Simulator: 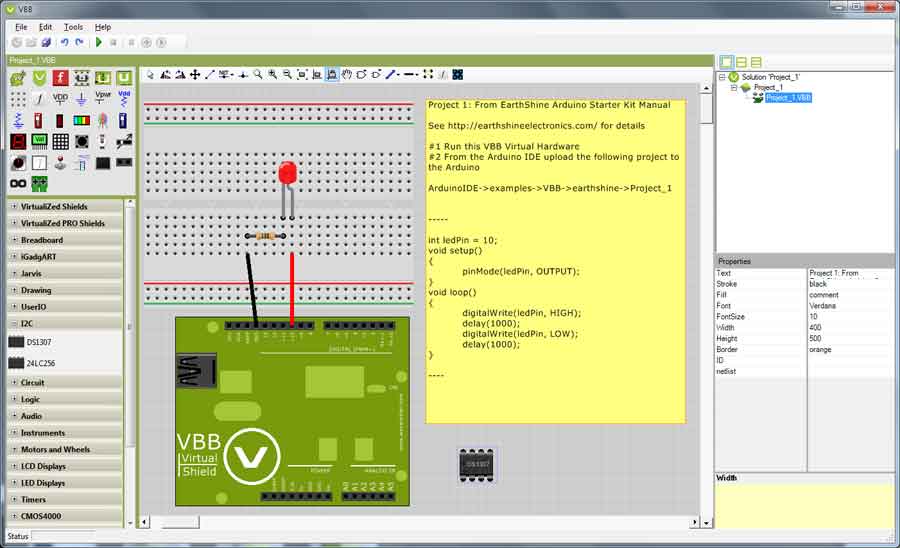 •  Learn from 75 built in Arduino examples

•  Explore dozens of different types of sensors, motors and lights

•  Learn the Arduino commands and what they do

•  Edit your own code examples

If you are looking for Arduino Projects / Programs with simulation, then below is the list of Projects compiled with proteus simulation

Simulator for Arduino by Virtronics

Simulator for Arduino is the most full featured Arduino Simulator available at the present time (watch the latest video below).

The benefits and features of the Arduino Simulator are:

Download the free version below with a short delay timer on loading a sketch, and when ready upgrade to the Pro Version. Simulator for Arduino Pro Version is currently used in many countries over six continents. The download consists of a zip file containing a setup.exe file which installs an exe file, help files, images and examples. It is designed for the Arduino Uno, Mega and most other common Arduino boards and does the following:

Simulator for Arduino by Virtronics

You can download the terminal version (latest version is v0.1.9) at www.simuino.com. NOTE: Downloads available on code.google.com is not the latest!

Run your sketch and evaluate in/out status of the digital and analog pins. The GUI is based on ncurses, i.e. run Simuino from a terminal window. Features animation in realtime according to actual delays in sketch.

The perfect tool for anybody who wants to get started with Arduino Sketch construction.

It is also possible to construct scenarios regarding analogRead, digitalRead and External Interrupts.

The purpose is to make the construction of a sketch easier. You can verify the functionality without having the Arduino board available. Simuino runs the sketch and shows the status of the digital,analog pins and serial output.

Way of working:
1. Start Simuino
2. Load your sketch into your editor of choice.
3. Edit logic,scenario data, log-text.
4. Load sketch into Simuino (command load in Simuino)
5. Evalute simulation by stepping in Simuino. Set values on the fly.
Repeat 3,4,5 until wanted result.

123D Circuits is an online electronics simulator and collaborative design platform, born from the partnership between Autodesk and Circuits.io, since in Fall 2013. It is an excellent tool for beginners who want to quickly get a grip of creating with Arduino, Raspberry Pi or other platforms right from their browser window.

Virtual circuits can be created by using the intuitive breadboard editor, or the more advanced electronic schematics or PCB editors, and ready made components and designs are also available for you to implement. Programming of the newly created circuits is possible with the code editor and operation is displayed in real time. You can also fabricate and order the electronics based on your own design.

123D Circuits is a free service, however upgraded memberships starting at US$ 12 per month will bring you discounts on orders as well as the ability to make your designs private.

Researchers at Columbia Engineering and the Georgia Institute of Technology have reportedly  made the first experimental observation of piezoelectricity and...