You have seen Propellers in Aircrafts or in marine ships, if not in real then in movies for sure. In this session we are going to design a Propeller Display with Arduino, LEDs and a DC motor. In this Propeller Display, text will appear to be rotating in propeller fashion in a circular shape.

The propeller display is in a way like LED Matrix. It contains 8 LEDs (Light Emitting Diodes) which are arranged in the form of an 8*1 matrix (8 rows and 1 column). They are arranged in the form of ladder one over the other. These 8 LED can be made to display any content like text, numbers, symbols etc. This is achieved by Perception of Vision (POV), in which many still images are moved quickly one by one in a sequence, which gives a perception of animation or a moving image. How this is done is explained in the tutorial given below. 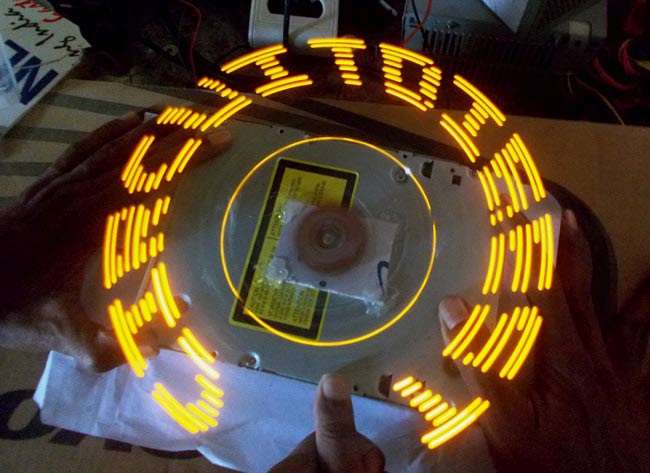 First take a stable base; I used a old PC DVD DRIVE which was lying around. You can get a wooden plank or a cardboard box. Then make a hole in the middle of DVD Drive (base) and insert the DC motor axis in it. Make sure the hole is tight enough to hold the motor and motor can rotate freely. I used Feviquick to put the axis in place.

Support the top of Motor to equate the uneven bumps. I used a dot board over it and used quick glue again to stick it with DC motor.

Attach the LI-ION battery on top. If you don’t have LI-ION battery of same size, just leave it. After that take each LED and test it with button cell or any other source. Then take some resistors and solder them with LEDs as per the picture and circuit diagram shown below.

Texas Instruments has launched the MSP-432, a Cortex-M-based microcontroller that aims at providing developers with a higher-performance upgrade path for...