VU Meter or Volume Meter is very popular and fun project in Electronics. We can consider the Volume Meter as an Equalizer, which is present in the Music systems. In which we can see the dancing of LEDs according to the music, if music is loud then equalizer go to its peak and more LEDs will glow, and if music is low then lesser number of LEDs shall glow. Volume Meter (VU) is an indicator or representation of the intensity of sound level over LEDs and can also serve as a volume measurement device.

Previously we built the VU Meter without using Microcontroller and audio input was taken from Condenser Mic. This time we are building VU Meter using Arduino and taking the audio input from 3.5 mm jack, so that you easily provide audio input from your Mobile or Laptop using AUX cable or 3.5 mm audio jack. You can easily build it on Breadboard but here we are designing it on PCB as a Arduino Shield using EasyEDA online PCB simulator and designer. 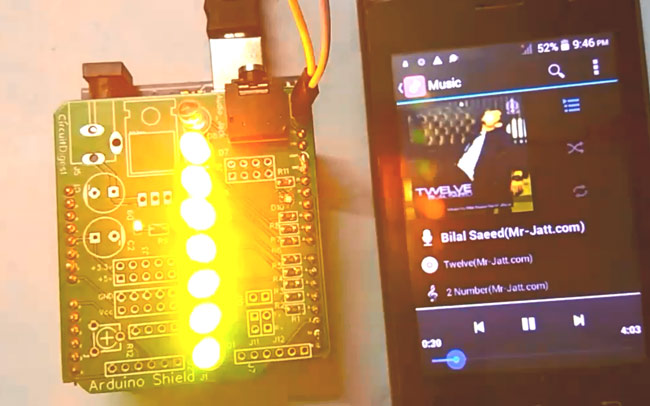 For designing VU Meter Shield for Arduino, we have used EasyEDA, in which first we have designed a Schematic and then converted that into the PCB layout by Auto Routing feature of EasyEDA.

EasyEDA is a free online tool and one stop solution for developing your electronics projects with ease. You can draw circuits, simulate them and get their PCB layout in just one click. It also offers Customized PCB service, where you can order the designed PCB in very low cost. Check here the complete tutorial on How to use Easy EDA for making Schematics, PCB layouts, simulating the Circuits etc.

I am scatterbrained. I like to drink hot tea. Oversteeped tea gets bitter. I am easily distracted. The natural choice...