Displays are always nice. So far I’ve just been demonstrating how to use 7-segmented displays to display numbers using very few resources. But what if you want to display text? Or pictures? Or both? Well in order to do that, you’re going to need a simple LCD screen. 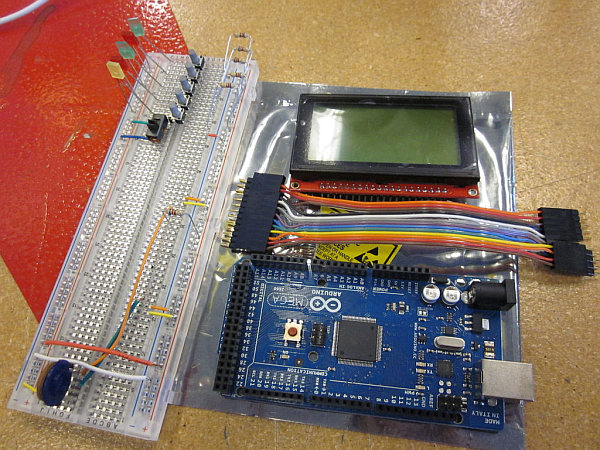 Now there are simple led screens out there right now which work on serial communication and only display text. That might be good enough for you, but I like flexibility. With a GLCD, I can use different fonts, show pictures, and even animations!

What’s also really nice is that the GLCD I’m using is only $20. Granted, this is a little bit more involved to program and to get to work above the super easy Serial.print(“Hello World”) commands.

As always, I made it at TechShop.
http://www.techshop.ws 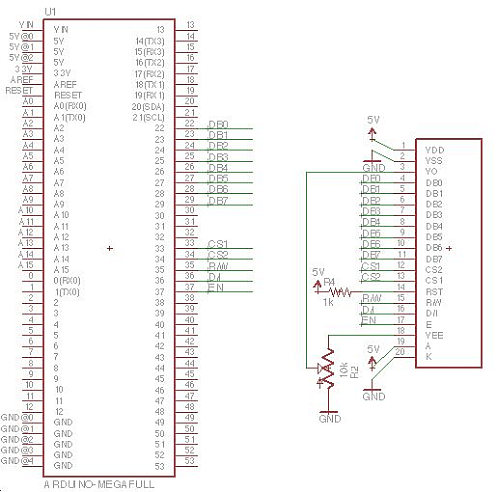 Heads up. There is going to be soldering. Also, to be clear, I am going to be using a Mega board. The wiring for the Uno is NOT THE SAME. But luckily, there is the wiring digram for that available in the provided manual in the GLCD library (next step).

1. Get the header pins and solder them to the GLCD. It is critical that a good connection is made! Just sticking jumper cables in will not cut it.

2. Follow the wiring diagram for the Mega version. Keeping track of what pins do what.

Make sure to get the power connections right. If you do not you could damage the GLCD.

First thing you are going to need to do is download the library for this GLCD. It can be found at:
http://code.google.com/p/glcd-arduino/downloads/list

Wherever that directory is, you will need to create a directory called
“libraries”, then extract the zip image into that directory.
So you will end up with
{sketchbook directory}/libraries/glcd

Then re-start the Arduino programming environment, and you should see the glcd
library in the Sketch > Import Library menu.

Then re-start the Arduino programming environment (IDE), and you should see the glcd
library in the Sketch > Import Library menu.

After you unzip, then follow instructions in glcd/readme.txt file.
For full details of the library see the included HTML documentation
in glcd/doc/GLCDref.htm

Now then. On to actual programming!

When ever you want to use the library, remember to include

The library should automatically detect what type of board that you have. However, you can override this manually and select certain ports to act as the display pins. This may or may not be useful to you.

When ever you want to update the GLCD, you can access it with GLCD.[command]. Keep in mind that this does not need to be run all the time. The display will retain the information given to it until changed. When it does update it writes over what is on top, but it does not automatically clear anything. If you write over big font with smaller font, both will be visible because the new stuff did not fully displace the old.

There is a lot of examples included with the library. If you are having trouble, run glcdDiag. It will run a diagnostic on the serial monitor and it might tell you what’s wrong.

This sketch prints “Hello World!” to the LCD
and shows the time in seconds since reset.

1. Arduino Uno $40
This CAN work, but it takes up just about all of the pins. If you want to do anything else, I recommend a Mega $60