I started this project because I wanted to make something that had mechanical, electrical and software components. After looking around on Instructables, I figured that an Arduino based laser engraver would be an interesting machine to make, and that the machine itself could make interesting things. Laser diodes have also advanced quite a lot in the last few years, allowing reasonably powerful DIY laser engravers to be made without the hassles of laser tubes. 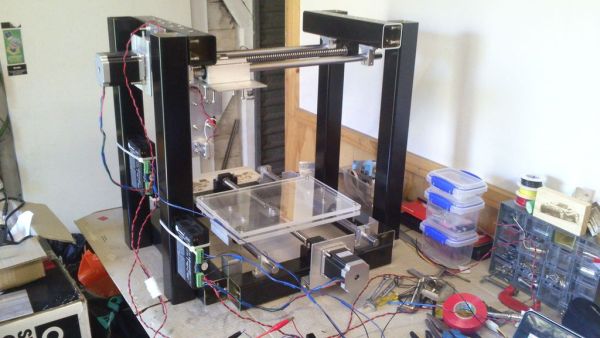 This machine can engrave wood and cut paper. I haven’t tried other materials yet because there is no fume extraction capability – plastics generally create toxic gases when burnt.

SAFETY WARNING – Please be safe when using lasers. The laser used in this machine can cause permanent eyesight damage, and probably even blindness. When working with powerful lasers (>5mW), always wear a pair of laser safety glasses designed to block your laser’s wavelength.

For a quick overview of the guts of the machine, have a look at the video below
(Note: The machine runs slightly faster now, and also has a different laser heatsink to the one in the video)

For pictures of engravings, skip to the end, or visit my website’s gallery:

Also, for any Aussies unsure about the laser import laws, I’ve attached the current rules (at Dec 2013) below. Laser diodes and laser modules (such as the one in this machine) are legal, however laser pointers are prohibited.
This is a pdf version of the following webpage:http://www.customs.gov.au/site/page4372.asp

Before starting construction, I made a CAD model of the machine to make sure that everything would fit, and to figure out the dimensions of the parts. Some screenshots of the machine’s CAD model are above.

The y-axis is on the bottom of the machine, and provides a moving base for the engraved piece. The x-axis is on the top, and moves the laser assembly (the laser isn’t shown in the model). 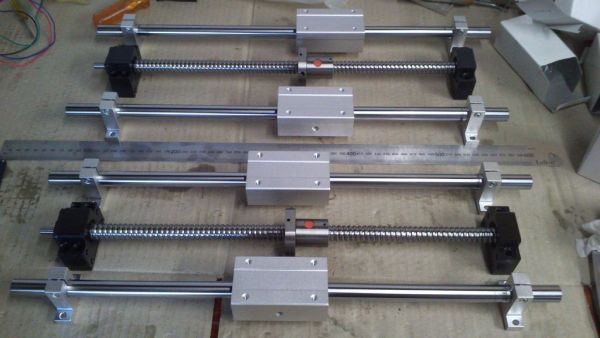 I chose to use ballscrews due to their very high accuracy (minimal backlash), rigidity and efficiency. Since the ballscrew nut consists of ball bearings rolling in a track against the ballscrew, there is very little friction, which means the motors can run at higher speeds without stalling.

The second photo shows a test fitting for the x-axis. On either side of the ballscrew is a linear bearing on a steel shaft. This configuration is quite common for cnc machines, and provides a stable foundation for the base plate (Y-axis) and laser assembly (X-axis).
The parts I used are:
16mm hardened chromed shaft , 500mm length (qty: 4)
16mm linear bearing – SC16LUU (qty:4)
16mm shaft support – SK16 (qty:8)

The ballscrew supports and shaft supports are mounted on 50mm x 50mm hollow aluminium posts. These posts are used for all major structural parts of the machine, and are actually aluminium fence posts (purchased at Bunnings, if anyone from Australia is reading). The thickness of the aluminium is about 2mm.

I chose to use these posts because they are easy to cut and drill, and also hold their shape well when supporting heavy loads. In addition, because they are square, they provide excellent reference surfaces to make sure things are parallel / perpendicular.
The holes were drilled using a cordless drill, and the posts were cut using a mitre saw. (It is also possible to cut the aluminium posts with a hacksaw).

M5 socket head cap screws, and M5 nuts were used to hold most of the parts together. I didn’t use a permanent fastening  method because I wanted to keep everything adjustable. Using screws also means that the machine is easy to disassemble and modify for future upgrades.

Some pictures of the frame being built are above. The base of the Y-axis is made up of several A4-sized 4.5mm thick clear acrylic sheets.

After some poor results with NEMA 17 stepper motors in an earlier design, I decided to use some NEMA 23 motors with a decent torque rating for this machine. Strong stepper motors also require strong drivers to get the most out of them. As a result, I chose to use a dedicated stepper driver for each motor.

Some details about the chosen components are below:

Note: It is really important to correctly align the motor shaft and ballscrew. The couplers I used have some flex to compensate for minor errors, but if the alignment error is too large, they will fail!