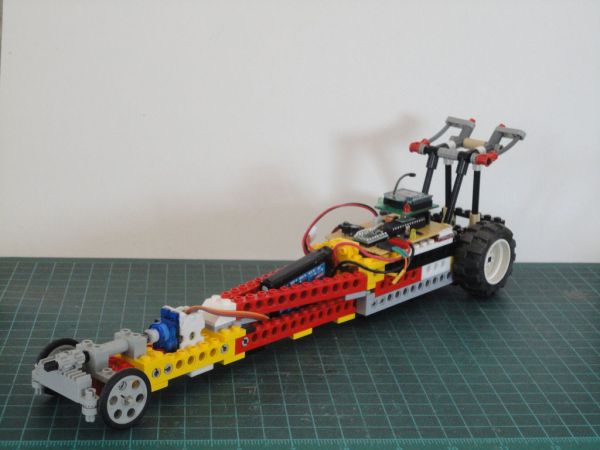 The name “12 Thumbs” came after I finished the design. While I was playing with my finished dragster on the cutting board (that I usually use as the background of my instructable photos). I spot that the the distance between the front and rear wheelbases is more or less 12″ long (See photo 4, 5)
I thought about the name “12 incher” but I don’t like the name. So I googgled around and came across the measurement term used in the old days, thumb, which is equivalent to an inch. (Source:http://en.wikipedia.org/wiki/English_units)
I like the word! So that’s it! My dragster got it name, “12 Thumbs”

The “12 Thumbs” equipped with a small servo to steer the car, same type of servo (9g) that I used with my other cars, R/C LEGO® Car (& Redux), R/C Race Car, or “The Bull” Buggy, etc.
But this time, instead of using the DIY servo supporter that made out of 2×2 plates. I design LEGO compatible, 9g servo mount that is (See next Step.)

For the motor housing, “12 Thumbs” is also using my 3D Printed Motor Housing. (See details in my R/C LEGO “The Bull” Buggy, Step 1)

In the mid section of the car is a battery compartment that is big enough to fit the 9V battery (or small 7.5V rechargeable LiPo battery) into. At the rear section, is where the Arduino and motor controller PCB is located next to the motor housing.

With 7.5V LiPo battery for motor power supply, and 9V, 24mm dia. round DC motor, Arduino, and DRV8833 motor controller IC (Details in Step 8), my “12 Thumbs” just flew out from the start line just like the real Top Fuel Dragster. On the first run “12 Thumbs” I set it speed to 3, it run so fast that I could not steer it straight, so I crashed it to the wall (See the Video in Step 10). Luckily there was no damage, the front wheels just flew off both sides.

“12 Thumbs” Dragster can be controlled wirelessly via XBee, or any other wireless radio, like bluetooth, or WIFI. In this instructable I chose to use XBee module since I have more than two XBee modules with me.

Disclaimer:
LEGO®, TECHNIC, are property of The LEGO Group of Companies (http://www.lego.com), which does not sponsor, own, authorize or endorse this creation.

Video is available in Step 10. 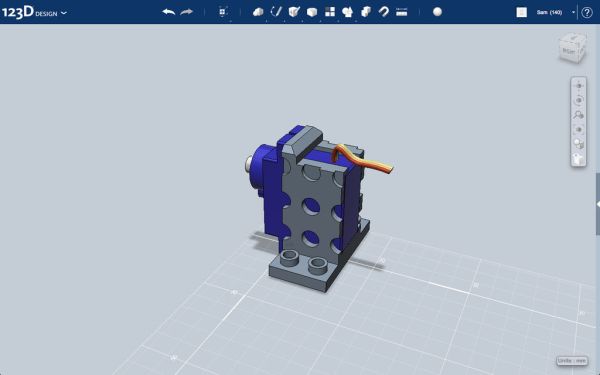 3D Printed Servo Mount idea came after the 3D Printed Motor Housing. And with the same reason, since I was not very happy and was tired of hacked or modified LEGO plates to use as the 9g servo mount. Even though, I could used the servo mount from my previously build cars. But that what I do not want to do, I always keep my custom design LEGO car!

So I am prototyping a LEGO compatible Servo Mount. This 3D Printed Servo Mount is the fifth version. The design and 3D modeling processes were done in123D Design.

The opening in the 3D Printed on the top of servo mount is for the wiring from the servo. The Servo Mount has LEGO compatible mounting plate at the bottom.

Attached is the STL file, you download below. You can view this 3D Model atmy 123D project page. The Servo Mount is still in prototyping stage, any comments and suggestion will be really appreciated.

It is a good value for the long run. My Servo Mount for Lego car design can be used in my other custom LEGO car design too.

Gallery of photos below show the 3D model in 123D app. and the actual 3D Printed ordered from a third party fabricator.

Following is the list of Lego Technic parts that I used for building this “The Bull” Buggy.
If you want to do this project you could use the differenct color for the car.

Note: The number in the bracket is the Lego’s Design ID.

Others
Servo Mount or modify LEGO plates to use as servo mount. (Download the stl file below)

LEGO compatible Motor Housing for Round 24mm dia. 9V motor. (STL file can be download from my “The Bull” Buggy project.)
or if you do not have 3D Printer (I wish I have one too!) You could order one from Shapeways, here.)

Every year, over a million people are killed by malaria. The only solution to this problem is to destroy mosquito...