Every year, over a million people are killed by malaria. The only solution to this problem is to destroy mosquito breeding grounds and curb the problem at source. As mosquitoes breed in stagnant water, I concluded that surface aeration would be one of the best means of eliminating breeding grounds.

So I built a device that generates air bubbles at regular intervals and effectively produces ripples up to a radius of 2 meters (sufficient for most urban water bodies). The device automatically switches on when it comes in contact with water an alarm alerts if the water body dries up or someone tries to remove the device from water. At less than $10, the device is cost effective and being solar powered, it is energy independent and maintenance-free.

Note: You will have to see this video to fully understand and appreciate the project.

Check out this blog for similar cool projects: http://www.gallactronics.com/.

More than half the world’s population is vulnerable to vector-borne diseases. These diseases, namely malaria, largely affect children and poor people and there is no promising solution to eradicate it. 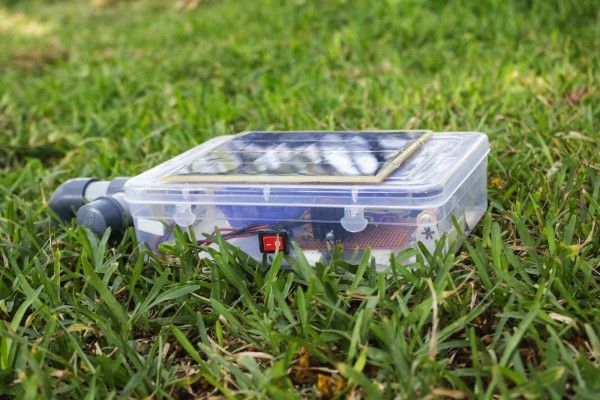 Question: So how can we control malaria using technology?

Hypothesis: By devising a surface aeration system for small water bodies, it should be possible to control mosquito breeding.

The primary reason why mosquito breeding cannot be easily controlled is that all breeding grounds need to be either regularly emptied or regularly treated with insecticides. Regularly emptying surrounding objects is tedious and often not practical. And employing people to regularly treat water bodies with larvicides and fogging is expensive. Therefore potential breeding grounds are not maintained and stagnant water in common elements of a cityscape like birdbaths, rain barrels, water reservoirs, ponds, swamps and sewage lines become vulnerable to mosquito breeding.

On evaluating the ideal conditions for mosquito breeding, I concluded that surface aeration would be the ideal solution to control this breeding because of the following reasons:

Having concluded that theoretically surface aeration is the key to controlling mosquito breeding, I went on to verify my hypothesis through experiment.

The device comprises of the following parts:

Of the various aeration methods, I chose bubble aeration to create surface turbulence and I used a portable aquarium pump as a bubble generator.

As the aerator needs to run perpetually, it is not practical to make it battery-powered. Thus I made it solar-powered.

The air-pump is also timer-based and runs at intervals of 10 minutes to increase its life.

As in the case of floodwater, rainwater, roadwork and construction sites, no arrangements are made to treat such temporary water bodies that are potential breeding grounds.

To deal with this problem, the aeration device automatically starts when it comes in contact with water so that it can be installed in a catchment area and when water gets collected, it starts running immediately and leaves no room for mosquito breeding.

An inbuilt alarm is provided to alert if the water body dries up or someone tries to remove the device from water.

After a break of around two decades I've recently started building a model railway. One of the issues I've faced...