The 1-wire weather group is always looking for new sensors and ideas that will allow them to monitor more and more elements, the 1-wire barometer is just one of these sensors. Based around the Motorola MPX4115A absolute pressure sensor, the group has been trying to design / decide on a good interface circuit for quite a long time.

The most commonly used and my personal preference is the Bray series. Both the version 1,2 and 3 designs use the same amplifier with adjustable offset and gain presets, the main difference between the three versions is that the second two versions have dual voltages, 5v and 10v with the amplifier being powered from the 10v rail, this way the amplifier has a greater output range which uses the full input range of the DS2438 ADC, subsequently giving better resoltion capabilities. 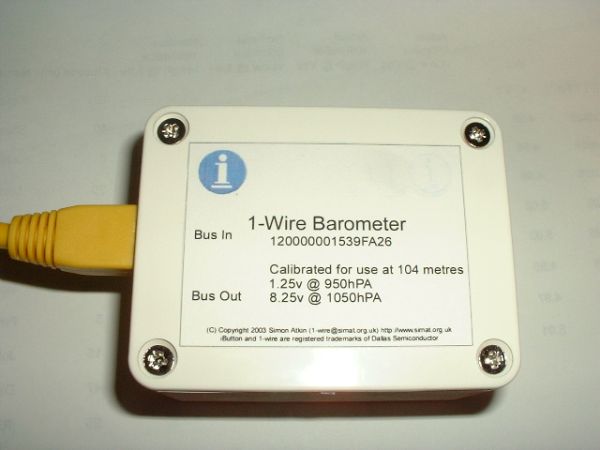 I have built and calibrated my own version 1 barometer and it has worked fine, tracking a local stations pressure quite closely.
Link to the designers page
David Brays Barometer Page.
Links to similar designs
Philip Gladstones Barometer Page
Whilst this project was getting a foothold I designed my own version using the DS2760 instead of the DS2438, I tried this because the DS2760 had a better resolution at 5v than the DS2438 but unfortunately I ran into problems at low pressures because the DS2760 goes to sleep after an input voltage of lower than 1.25v.
For more detail: 1-Wire Barometer Project