Assembly of the Female Connector Block

This web page describes how to fabricate the female end of the wiring harness. The entire assembly and test process is divided into the following steps.

Return to the main page for the LCD panel assembly

Each team of two students will pick up a set of components shown in the following photograph. The number of crimp pins will be greater than the four in the photograph.

The cable bundle has nine stranded wires, each with a different color of insulation. The wires are 22 AWG and approximately 40 cm (16 inches) long. The bundle is held together with a loosely cinched zip tie. Do not tighten the zip tie until the wiring harness is finished. You may need to adjust the wires so that the ends line up. Furthermore, tightening the zip tie before you finish will make the bundle stiffer, which will make it harder to adjust the orientation of individual wires as they are crimped. 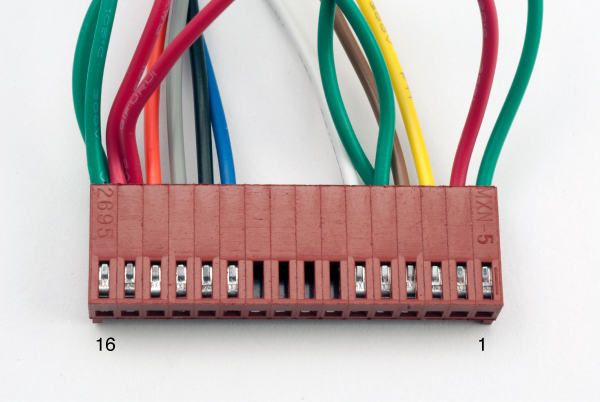 Gently fold (do not bend) the green jump wire so that it forms a “U” shape, and cut the green wire in half.

Strip one end of the short red wire

Make your first crimp with the short red jumper wire. This will allow you to practice with a length of wire that is easy to hold. If something goes wrong, you can cut the end and start again.

Using the crimp connector as a reference, strip one end of the red jumper wire. The bare wire should be a little longer than the tabs closest to the curled end of the crimp connector. Compared to other applications, such as joining two wires, or attaching a wire to a screw terminal, this is a very short length of bare wire.

Get ready to crimp

The crimp connectors and wires are small. Holding everything in place takes a steady hand and some patience. It is easy to become frustrated. However, with a little practice, it becomes easier to make the crimp connections. Once you develop your technique, it is possible to make a crimp connection in 15 to 20 seconds, start-to-finish.

Locate the pieces in the crimp tool

Carefully close the jaws of the crimp tool by squeezing the handles. Monitor the orientation of the crimp connector and the alignment of the bare wire to the crimp tab. It is very easy for the wire and crimp tabs become misaligned.

The finished crimp connection should look something like the following photo

Set aside the red jumper wire with the newly crimped connector. 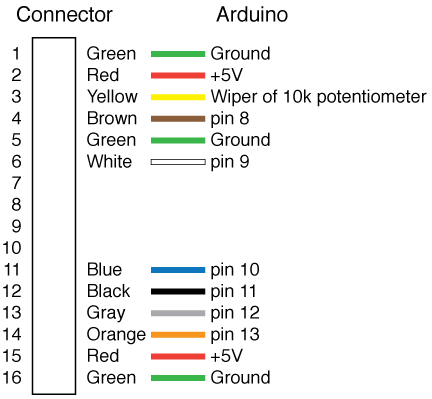 The next step is to join two wires with a single crimp connector. This is needed to connect the short jumpers to each other, and to the longer wires in the bundle.

Strip one end of each of the two short green jumper wires. This strip should expose a longer section of bare wire — longer than the stripped section for the red jumper wire. As shown in the following sequence of photographs, the bare wire should be long enough to completely fill the space between both pairs of tabs on the crimp connector.

For more detail: Wiring Harness for the LCD Panel