I got introduced to a web based calculator emulation via this thread in 43oh.com forum.
I got interested and start playing w/ the idea of implementing the emulation on an msp430, my code is based on Mr Ken Shirriff’s work from the following pages.
TI DataMath 2500II emulations
Sinclair Scientific emulation

There is also a feature in HaD regarding Ken Shirriff’s Sinclair Scientific work here.
Calculator Functions and Features 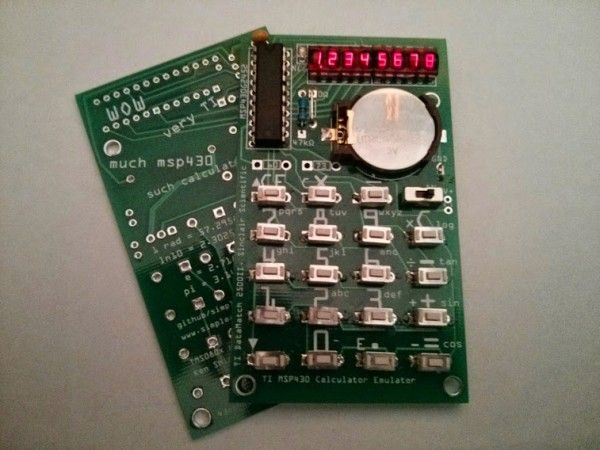 As this project emulates the original TI DataMath and Sinclair Scientific calculators, it operates exactly the same as the original ones. The keyboard layouts are similar in both calculators. On the PCB, the dominant key legends (on top of each key) are for TI DataMath, while the smaller legends (top and slightly left of each key) are for Sinclair Scientific emulating.
I had select the MCU clock speed to be 8 Mhz, which appears to more or less matches the speed of the original calculators. I only observe the speed of the original calculators on youtube videos.
The emulating calculator starts / defaults as TI DataMath. If you want to start the calculator as a Sinclair Scientific, hold down key “7” while turning on power.
Holding down “4” while turning on power will place the emulator in a “slow CPU” mode, and it runs 8 times slower than usual as a TI DataMath. This will show how the display (as a register) changes during calculation cycles.
Holding down “CE” while turning on power will briefly show a pre-entered message (8 letters). I added this feature to include personal message as I build these calculators as gifts. To enter a personal message, one can hold down “X” while turning on power. Pressing the keys 0, 1, 2 to 9 allows to select numerics and letters like a old cellphone keyboard, advance letter positions by pressing “+” key. The personal message will be saved in flash memory after the 8th letter has been entered.
* note that the above key sequence is for Version 2 boards only. Version 1 boards uses different keys.

Eventually I built the emulator on a standalone PCB design fitted w/ bubble leds from the ’70 when the original calculators were made.
This is the original failed build (w/ faulty 9 digit leds) and the 1st successful build on V1 PCB. Next to it is are the 1st two V1 PCB I built. They were given away a few weeks ago.
Here is a photo with a blank PCB backside. Eventually I build 3 of these and they are all gone.
For more detail: TMS0803/5 Emulating Calculator Build