Have you ever had the desire to see what can not be seen? I never had the ability to see in thermal infrared, and it is rather cool to be able to see in the thermal infrared part of the electromagnetic spectrum. Unfortunately, most thermal (FLIR) cameras are very expensive. In 2011 cameras frequently cost several thousand dollars. This project was created to develop a cheaper solution at a fraction of the cost.

The primary reason for the cost difference is the thermal infrared sensor. Instead of having a 2 dimensional array of sensors, a single sensor is moved in a raster scan pattern. Moving this single sensor takes time. So while you have fewer costly sensors, it takes longer to take a picture. This means the camera can not take images of moving objects, and the objects have to be very still during the scanning.

The original instructions can be found on my web sitehttp://www.centralnexus.com/thermal/. These instructions require some soldering ability. It can take most of your weekend to assemble this camera once you have the parts. If you’re good with soldering you may be able to assemble it faster.

Step 1: Get The Parts

The following are the parts used in creating this camera. The links to the web sites that carry these parts can be found on my web site. It’s been a while since these parts were ordered, and you may need to find other web sites with similar parts if a part is no longer available. It’s highly recommended that you do not substitute the MLX90614ESF-DCI sensor because it’s the most accurate with the narrowest field of view.

Arduino Project Enclosure
2x Servo – Small
Pan/Tilt Bracket
Arduino Uno or an Arduino variant
Logic Level Converter needed when using a 5 volt version of the Arduino, which is the most common version.
Break Away Headers – Straight
Break Away Male Headers – Right Angle
Microsoft LifeCam VX-700
Protoshield PCB for Arduino. Almost any Arduino prototype shield will do.
MLX90614ESF-DCI. This model has the best accuracy and narrowest field of view.
About a foot of ribbon cable. Almost any wire will do. At least 5 wires are needed to connect the sensor to the Arduino and laser.
.100 KK Housings & Terminals 6 Cir. (2.54mm) for the ribbon cable.
PCB board for holding the laser and sensor.
A switch to turn the laser on or off.
A laser for aiming the sensor and aligning the pictures.
Small nuts and bolts (#2-56 x 1/4″) to attach the servos.

The following additional parts and tools are used in creating this camera. 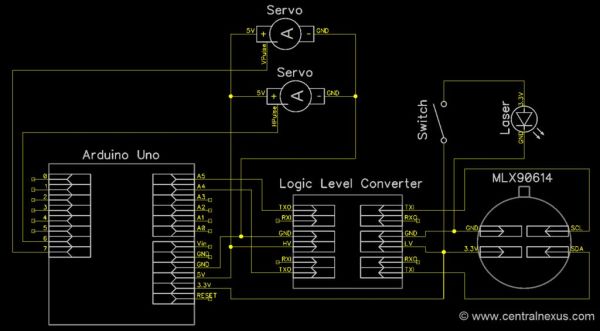 Wire the Arduino with its parts like in this diagram. Some soldering will be required.

Ever looked at a lightbulb and thought that doesn't look too complicated, I bet I could make one? With this...