After CNCPaul/LathePaul created such an awesome-looking heating chamber, the postie once again knocked on the door at Nerd Towers to deliver yet another eBay purchase – this time, it was a K-type thermistor and breakout module (basically just a MAX6675 on a board with pin headers)

We  had looked online at temperature controllers but they all seemed to be quite pricey for what they were – a cheap thermistor, a few 4×7 segment displays and a fancy box. Since we’ve currently got loads of 16×2 character displays and a boxful of PIC microcontrollers knocking about, it made sense (to us at least) to make our own temperature controller with a simple menu system.

We stuck an HD44780 character display onto a breadboard with a massive old PIC16F877A chip that just happened to be lying around. To this we also added the newly acquired temperature module and bundled some firmware onto the chip.

The LED on this breadboard indicates whether or not a relay would be activated, to switch the mains supply to our 300W cartridge heaters. As our target temperature in this example has yet to be met, the heater element is still switched on. 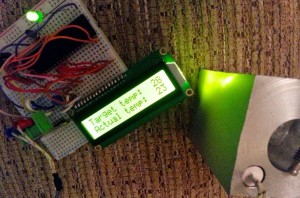 Here’s the firmware for our controller. It’s pretty basic. The most notable thing about it are the button press routines – we’re using just three buttons, up/down/select. But, like an alarm clock, a “short press” will cause the values to increase/decrease by just one at a time, but a “long press” results in the numbers whizzing by in multiples of ten.

For More Details: Temperature controller for K-type thermocouple and MAX6675

EasyPlug: The Sensor Shield for Arduinos

Get straight to the action. Connect sensors to your Arduino in literally 2 seconds. $35,000 Stretch Goal: On-board sensor tester...