Last week, we learnt about the basic structure of an Arduino program and took a closer look at the ‘blink’ example. Hopefully you took the opportunity to experiment with code, adjusting the timings. This time, we’ll be writing something from scratch. In fact, let’s make a traffic light.

Note: This is the latest in a series of beginner level tutorials for Arduino, the open source electronics prototyping platform. Here’s a list of the previous articles in the series: 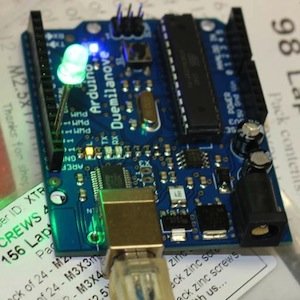 You may also want to download and install Fritzing, the tool I used to draw the wiring diagrams for these projects.

Here’s a quick schematic I made up in Fritzing. It’s very simple – just the three LEDs wired with resistors to three separate input pins, and all connected to the ground.

We’ll start by defining variables so that we can address the lights by name rather than a number. Start a new Arduino project, and begin with these lines:
int red = 13; int yellow = 12; int green = 11
void setup(){ pinMode(red,OUTPUT); pinMode(yellow,OUTPUT); pinMode(green,OUTPUT); }

READ  Dr Blinkenlights... (or how I learned to afford the BlinkM)

That was easy. Now for the difficult part – the actual logic of a traffic light. I’m going to create a separate function for changing the lights, and you’ll see why later.

Done! Now, upload and run. You should have a working traffic light that changes every 15 seconds. However, I think it’s a little basic right now, so let’s add in a pushbutton for pedestrians to change the light whenever they like. Refer to the updated circuit diagram below:

You’ll notice that the switch has a high-impedance 10k resistor attached to it, and may be wondering why. This is called a pull down resistor. It’s a difficult concept to grasp at first, but bear with me.

A switch either lets the current flow, or doesn’t. This seems simple enough, but in a logic circuit, the current should be always flowing in either a high or low state (remember – 0 or 1, high or low). You might assume that a pushbutton switch that isn’t actually being pushed would be defined as being in a low state, but in fact it’s said to be ‘floating’, because no current is being drawn at all. 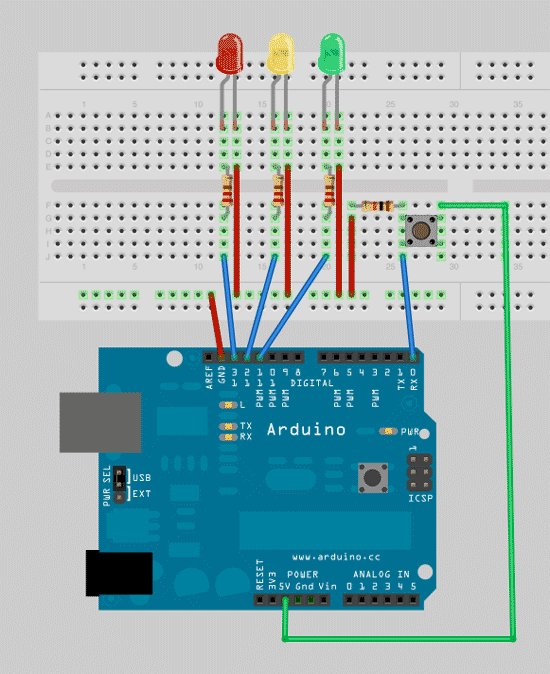 In this floating state, it’s possible that a false reading will occur as it fluctuates with electrical interference. In other words, a floating switch is giving neither a reliable high, nor low state reading. A pull down resistor keeps a small amount of current flowing when the switch is closed, thereby ensuring an accurate low state reading. In other logic circuits, you may find a pull-up resistor instead – this works on the same principle, but in reverse, making sure that particular logic gate defaults to high.

Now, in the loop part of the code, instead of changing the lights every 15 seconds, we’re going to read the state of the pushbutton switch instead, and only change the lights when it’s activated.

Introduction What every new system design has in common these days is wireless. Like bacon, it just makes everything better....