When MC Hammer rapped ‘You can’t touch this’ little did he know of the work being carried out by a group of scientists at Bristol University. The team led by Dr Ben Long and colleagues Professor Sriram Subramanian, Sue Ann Seah and Tom Carter have produced an ultrasonic sound system able to generate 3D shapes in mid-air that can be felt. 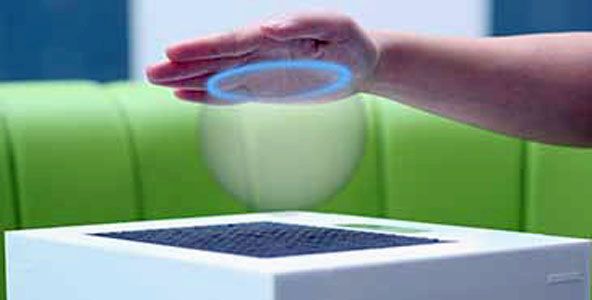 The apparatus consists of a 16 x 20 array of ultrasonic transducers. The phase of the signals driving the individual transducers is altered to produce a shaped pressure wavefront. This is similar to the technique used in phased-array radar systems which steer a radar beam by altering the drive signal phase to an array of transmitting antennae. The team from Bristol have demonstrated how the system can produce a ‘pressure profile’ of a 3D shape in space that is tactile.