Nobody likes having blood samples drawn. What’s more, such samples typically have to be analyzed in a lab before they’re able to tell us anything. But now scientists at the University of Cincinnati and the US Air Force Research Laboratory are developing a system in which a Band-Aid-like skin patch is able to gather and transmit medical data in almost real time, by analyzing the patient’s sweat … and you just need a smartphone to read it, no poking or prodding required.

Developed by a team led by U Cincinnati’s Prof. Jason Heikenfeld, the flexible adhesive patch contains an electronic circuit, communications antenna, controller chip, and a microfluidic paper-based sweat-sampling system. That paper wicks minute amounts of sweat from the skin in a tree root-shaped pattern, in order to maximize the sampling area. 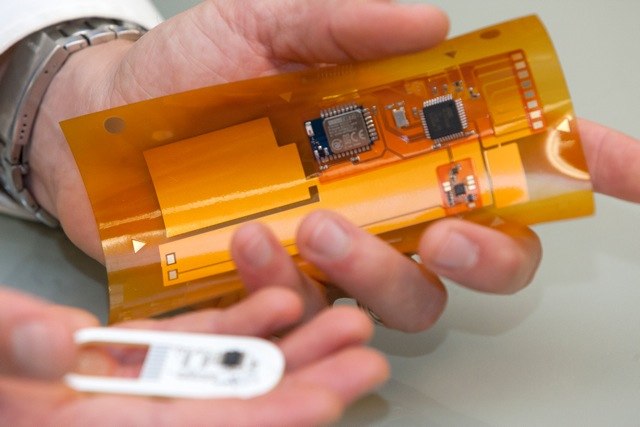 In order to keep the sweat flowing through the paper for a sustained period of time (instead of just initially saturating it), a superabsorbent hydrogel is also incorporated into the patch, to draw in and store the sampled perspiration – even after several hours of collecting sweat, that gel reportedly only swells by 2 to 3 millimeters.

The patch has no power source of its own, but instead draws power from an adjacent smartphone’s signal – just like a passive RFID tag. Once a phone is close enough to it, the patch sets to work measuring ion concentrations of given biomarkers present in the sweat. The current prototype patch has been designed to measure sodium and chloride concentrations, although future versions could also measure things like electrolytes, metabolites, proteins, small molecules, and amino acids.

That data is wirelessly transmitted to an app on the phone. By analyzing the biomarker ion concentrations, it’s possible to ascertain the patient’s physical state. This means that the technology could one day be used for applications such as keeping athletes from cramping up by monitoring their electrolyte levels, non-invasively keeping tabs on premature infants’ vital signs, allowing diabetics to watch their glucose levels, or for fine-tuning medication dosages by measuring drug metabolites in the patient’s sweat.

How to Build an RGB Full Color LED Module Circuit