Our most popular item on our display at Maker Faires is always the Rainbow Jar. One customer has already replicated it so we thought we’d share how we made it so you can make your own! 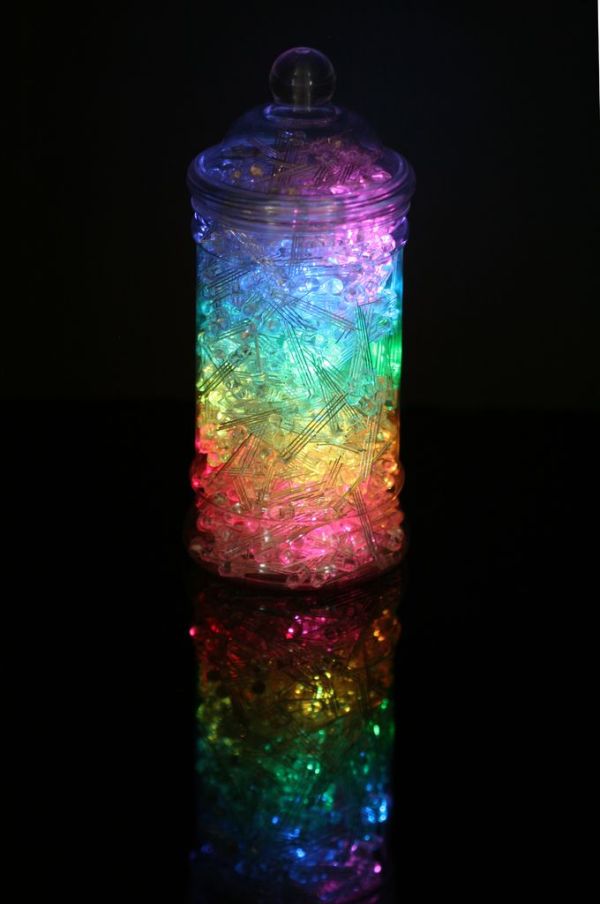 https://vine.co/v/hqxpVgdFQ9z (tried embedding this vine but it breaks instructables!)

Step 1: Getting Started – What you need

This is all the stuff we used. 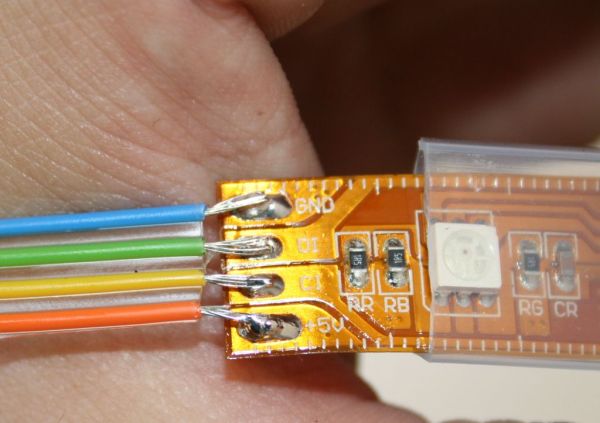 The strip is controlled by an Arduino, using two control wires Data and Clock. We’re attaching green to the data and yellow to the clock. Orange to the +5V and Blue to the GND

Remove the red and brown wires from the rainbow cable and keep them for later. Strip the four wires at once using the super cool and handy Hakko Cutters.

If you’re using our Rainbow Cable then bend the orange and blue cables out a little. A little bit of solder added to the tips of the wire will help them adhere when you hold them onto the pads and add some heat from your soldering iron.

Now we make a little shield for the Arduino.

Take the pin headers and snap off two lots of four pins. Put them into the Arduino, you’ll want them in the 0,1,2,3 on one side and the Vin GND GND and 5V headers on the other side.  Put the strip board on top and mark up how much of the board you need. They’re not opposite each other so you won’t need to do anything with the copper on the stripboard.
Score along the lines of what you need on the stripboard and snap it along the score lines.

Now we do a little alteration of the pin headers, pushing them down on a hard surface until the black plastic bit is flush with the hard surface. That way we can put the plastic bit on the side of the stripboard with no copper and have a nice bit to solder onto the copper.

Strip the other ends of the rainbow wire and solder the Clock and Data Pins to the strips that line up with 3 and 2 Respectively. Don’t worry if you do them the other way by mistake, you can change it in the code!

This seems to run fine as it’s only 50cm of strip through the Arduino, but lets make it a bit future proof adding external power, using a cool 2.1mm female jack.

Using a bit of the red and brown wire we cut earlier attach to the 5V and GND lines on the shield we just made. Attach the 5V to the +ve on jack connector and GND to the -ve.