It has been quite some time since my last post – as often happens, life intervenes and this time just a bit too much hospital time both for myself and one of my kids. Things are good now and normal can resume… 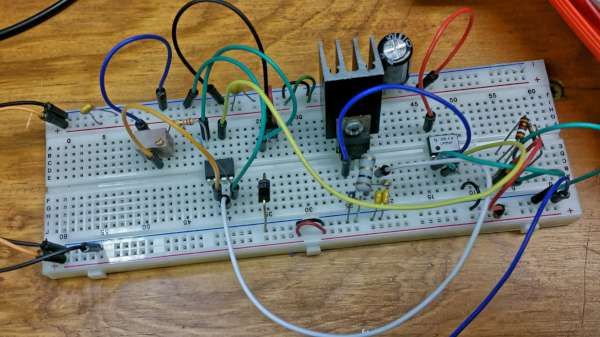 For years I have had this Black&Decker Firestorm FSL18 flashlight, but hardly ever used it due to its anemic light quality. The fixture is powered with an 18v battery pack and uses a KPR18v0.3A bulb putting out 7 candlepower when running at 18 volts. 1 candlepower = 1 lumen. Compared with the brightness of the 12v power LEDs I have been working with lately, the brightness from this incandescent bulb is not much better than a glassed candle. The trigger for upgrading this flashlight came one day when the wife complained an LED lightbulb had failed in her workshop. I replaced the bulb, but rather than throw it away, I took it down to my workshop to disassemble and identify what had broken.

The LEDs themselves were fine, but the power supply had fried. As I was turning the bulb’s heatsink in my hands, I happened to glance at the flashlight sitting on my workbench, and within 5 minutes of realizing the heatsink will probably fit in the case, the flashlight was already being disassembled. Within an hour, I had one of my 900 lumen LEDs mounted on the heatsink and with the help of my Dremel, had the reflector’s neck trimmed down to fit the LED perfectly.