If it weren’t for the microchip, your smartphone would be size of a building and need its own power plant to work. Thanks to the integrated circuit and its modern incarnation in the microchip, electronics are a bit easier to carry around than that, and this week, Christie’s put one of the very first integrated circuits up for auction. Designed and constructed in 1958 by Texas Instruments, it’s one of the three earliest “chips” ever made and went on the block with an estimated value of up to US$2 million. 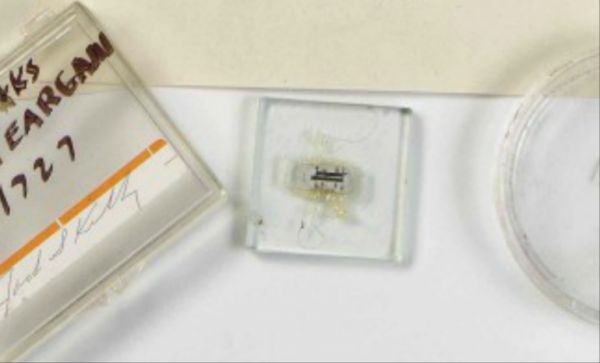 The first computers were massive constructs that were as much architecture as electronics. They relied heavily on radio valves (AKA vacuum tubes), which were large, bulky, and mounted on circuit boards. They needed a lot of space for air to circulate because each was as hot as an incandescent bulb and technicians needed easy access because they burned out so frequently. It was one reason why early computers were monsters that filled whole rooms and needed constant attention to keep them working.

The invention of the transistor in 1947 solved a lot of these problems, but wiring and soldering together the components was still a time-consuming and expensive process that resulted in devices that would fit on a pinhead today, but back then were the size of packing crates.

Printed circuits had been in use during World War II, and when the technology was released for civilian use, it produced another reduction in size as breadboards and wiring were replaced with conductors printed onto boards. The actual components still needed to be soldered in, though automated soldering processes were later developed. These printed circuits resulted in a dramatic reduction in the size of electronics from portable televisions to the infamous transistor radio.

For more detail: One of the world’s first integrated circuits goes up for auction

A fountain can make a nice decorative fixture for your garden. But it isn't always easy to run a power...