Widespread adoption of cameras in smartphones and other mobile devices, together with consumer expectations for higher quality, sharper images are driving the need for simpler designs, smaller sizes, and lower component counts, particularly as many smartphones move to integrate front- and back-facing cameras. 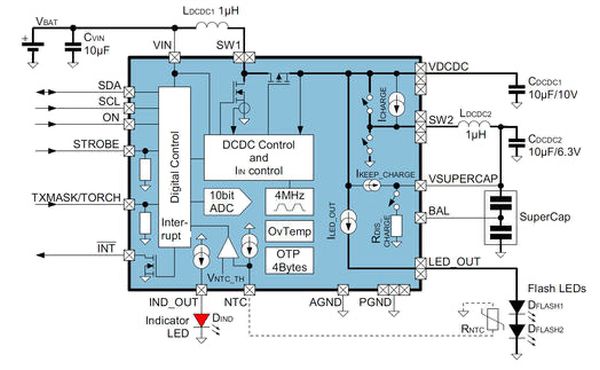 LED driver vendors are developing new designs to address some of these requirements as demand continues to climb for all types of mobile devices with integrated cameras. Some suppliers are even developing innovative architectures to improve picture quality.

One example is ams AG’s AS3630 photo flash driver (Figure 1) that leverages power from a supercapacitor. It is said to produce 4x brighter flash light output compared to most flash systems found in smartphones, which translates into sharper images.

Figure 1: The ams AS3630 uses an I²C interface for current and timing adjustments to set the end of charge voltage and measure the Supercap and LED parameters through the internal ADC. A dedicated TXMASK/TORCH input can be used for a torch button or to reduce the battery current if a RF power amplifier (PA) is operated at the same time (TX Masking), (Courtesy of ams).

Here are the details. The AS3630 can drive up to 8 A current through the flash system, which means pin-sharp image taking and support for faster shutter speeds. Ams noted that photos of fast-moving objects in dark conditions, which previously would have had motion artifacts, might now be captured in detail. It also eliminates glare and discomfort because even short flash durations as low as 10 ms provide sufficient light, according to ams.

My kids are learning Morse code this summer, so I threw together this little circuit to help them learn. And...