The purpose of this Design Idea was to improve reliability, add new features, and replace a latching power switch with a momentary one.

The control button BUT1 requires normally open and normally closed contacts, which must not be closed simultaneously. 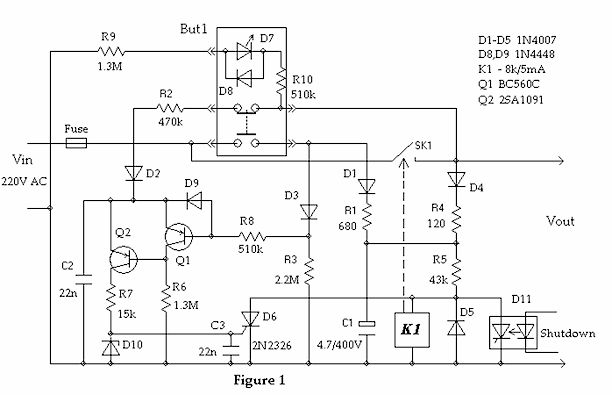 Initially, while the button is not pressed, the switch is opened because relay K1 is deactivated. The normally-open contacts of the relay and the button are the only components under voltage in this state.

When the button is actuated for the first time, the capacitor C1 is charged through D1 & R1, and relay K1 is activated, closing its contact pair SK1. The relay from now on is powered via D4 & R4 also.

When the button is released, the NC contacts allow C2 to charge to about one-half of the mains voltage through R2 & D2. This prepares the switch for subsequent shutdown when the button is pressed again. Q1 is on and Q2 is off.

With the next press of the button, both transistors change their state, and the discharge current of C2 triggers SCR D6, de-energizing the relay and disconnecting the load. Due to the latching action of the SCR, this state cannot be reversed by any subsequent actuation of the button while C1 is not discharged.

Releasing the button returns the circuit to its initial state.

LED D7 and protection diode D8 are embedded in the button. Modern LEDs are bright enough with a current is in range of 0.01 – 0.02mA, so despite the relatively high voltage, the total power consumption for the illumination is about 5 – 10mW or less.

An optional opto-thyristor D11 adds the ability for a powered system to be switched off from within the system.

This is a quick project for a timer. Recently I finished my UV light exposure box and thought that it...