While I waited for the Mini 7-Segment Clock v3 PCBs to arrive, I got to work on designing an enclosure. First, I exported the PCB from EAGLE to SketchUp.

I then assembled a complete 3D model with all the necessary components.

With the 3D model complete, I could then design an enclosure to house the PCB and know exactly what it’s going to look like before printing it. I even incorporated a little cable strain relief.

There are no mounting holes on the PCB, so I can’t use board stands. I had to think of an ingenious way to secure the PCB into the enclosure, keeping both sides of the PCB visible, with a model that I can actually print 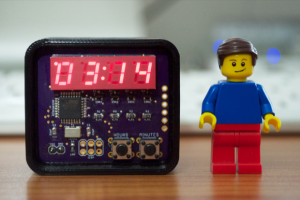 The solution was to incorporate some little raised rails along the inside of the enclosure. The PCB will be held in place by snapping it into the 3D-printed frame between the inner-divider and those rails.

The design is very minimal, it’s just enough to keep the clock upright. I think it’s going to look pretty sweet. I don’t want to hide the PCB in a little project box where all you can see is the display. I want to showcase the PCB and the electronics.
The PCB has a 6-pin ICSP header for burning the bootloader, but I’m not going to solder in a header. I’ve always wanted to try and program a chip with pogo pins. What’s the use of soldering in a header if it’s only going to be used once? Seems like a waste. Not to mention, sometimes it just gets in the way. The ICSP header on version 2 of the Mini 7-Segment Clock got in the way of the power cord. It wasn’t apparent until I screwed on the back panel and realized what little space I had to work with. I managed to squeeze the cable through the hole in the acrylic, but it was tight.