An entire product and manufacturing infrastructure was built at the start of this decade in anticipation of demand from TV manufacturers for LED backlighting. TV makers were under extreme price pressure from consumers and demanded the LED makers came up with inexpensive backlighting solutions. (See TechZone article “LED Backlighting Enhances LCD TV Picture Quality.”) To support the nascent LED TV sector, the LED makers more than doubled manufacturing capacity and added a similar level of support for the plastic packaging used to mount the backlighting LEDs.
It turned out that the LED TV makers did not need quite as many of these cheap LEDs as anticipated leading to significant industry overcapacity. Faced with a glut of products, the LED manufacturers promoted “mid-power” plastic-packaged LEDs to lighting manufacturers. The companies argued that their mid-power packages offered designers a less expensive option for general lighting than the high-end devices that traditionally catered to mainstream illumination.
However, like with most electronics components, there was something of a trade-off between price and durability. At the high temperatures typically experienced by LEDs used for lighting, the very plastic packaging that reduced the cost of the device was also a source of degradation. This degradation could result in poor lumen maintenance, leading to shorter LED life and chromaticity shift. To counter the problems a major manufacturer is now introducing mid-power LEDs based on ceramic substrates.
This article provides an overview of the mid-power LED sector with examples of plastic- and ceramic-packaged devices from leading LED vendors.
Cost-effective lighting solutions 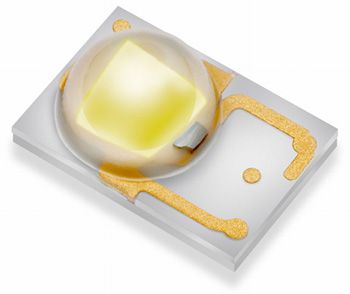 Industry overcapacity has encouraged manufacturers of mid-power LEDs to promote the devices for low- to medium-cost general lighting applications. The devices are a good option for this target market because mid-power devices match the output, in terms of both luminosity and light quality, of the high-power LEDs of only a few years ago but at a much-lower price. While there is no industry definition of mid-power (as it is essentially a moving target), contemporary devices typically feature input currents of 30 to 150 mA, luminosities of 30 to 110 lumens, and efficacies up to 130 lm/W.