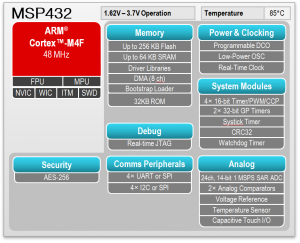 Texas Instruments has launched the MSP-432, a Cortex-M-based microcontroller that aims at providing developers with a higher-performance upgrade path for MSP-430 users while still retaining low-power operation. The 32-bit processor uses an M4F core with FPU and DSP extensions, achieving a CoreMark score of 3.41/MHz and a certified ULPBench score of 167.4, among the highest in its performance class.

The device can operate at full speed down to a supply of 1.62V, simplifying direct sensor interface. It specs an operating current of 95 µA/MHz and a sleep mode current of 850 nA with its real-time clock running. The device also contains a number of architectural features that support reduced power consumption while boosting performance. Its Flash memory is organized as two independent banks so that the MCU can read and erase memory simultaneously to avoid stalls, while a 128-bit pre-fetch buffer helps reduce wait states while executing code. The peripheral driver library is stored on-chip in ROM, boosting execution speed up to 200% while lowering power up to 35% compared to Flash-based storage. The on-chip RAM is organized as eight individually-powered banks, allowing developers to completely turn off the RAM banks not needed for data retention during deep sleep mode.

Several forms of developer support are available for the MSP-432. A LaunchPad development board costing less than $13 gives developers a chance to do rapid prototyping using BoosterPacks to add system functions such as displays and sensor arrays. TI has also released a new version of its MSPWare software providing ready access to technical information about the part from the cloud or within an IDE. TI also offers ULP Advisor to help developers optimize their software for power efficiency, and the EnergyTrace+ tool for monitoring actual power usage at run-time.

The 32-bit MSP-432 is designed to give applications based on the 16-bit MSP-430 family an upward performance growth path while transitioning them to the widely-supported ARM Cortex-M architecture. Most of the peripherals from the MSP-430 family are retained in the MSP-432 series, simplifying software porting, and TI provides both a porting guide and developer support to ease the transition.

The MSP-432 devices now available include up to 256 kbytes of Flash and 64 kbytes of SRAM. The product roadmap includes memory options up to 2 Mbytes of Flash pin-compatible packaging and additional analog functionality in subsequent family members.

In semiconductor and electronics industry, a diode is a widely used discrete component. It is a significant element in many...