In this project we are going to make an IOT Based Air Pollution Monitoring System in which we will monitor the Air Quality over a webserver using internet and will trigger a alarm when the air quality goes down beyond a certain level, means when there are sufficient amount of harmful gases are present in the air like CO2, smoke, alcohol, benzene and NH3. It will show the air quality in PPM on the LCD and as well as on webpage so that we can monitor it very easily.

Previously we have built the LPG detector using MQ6 sensor and Smoke detector using MQ2 sensor but this time we have used MQ135 sensor which is the best choice for monitoring Air Quality as it can detects most harmful gases and can measure their amount accurately. In this IOT project, you can monitor the pollution level from anywhere using your computer or mobile. We can install this system anywhere and can also trigger some device when pollution goes beyond some level, like we can switch on the Exhaust fan or can send alert SMS/mail to the user. 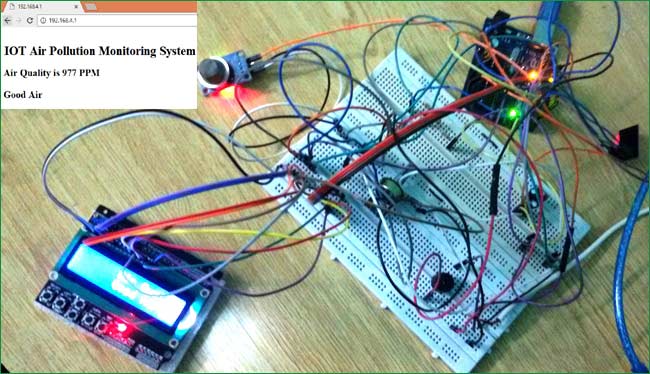 First of all we will connect the ESP8266 with the Arduino. ESP8266 runs on 3.3V and if you will give it 5V from the Arduino then it won’t work properly and it may get damage. Connect the VCC and the CH_PD to the 3.3V pin of Arduino. The RX pin of ESP8266 works on 3.3V and it will not communicate with the Arduino when we will connect it directly to the Arduino. So, we will have to make a voltage divider for it which will convert the 5V into 3.3V. This can be done by connecting three resistors in series like we did in the circuit. Connect the TX pin of the ESP8266 to the pin 10 of the Arduino and the RX pin of the esp8266 to the pin 9 of Arduino through the resistors.