PORTLAND, Ore. — Living beating hearts on-a-chip were recently created from pluripotent stem cells discovered by 2010 Kyoto Prize Winner, Shinya Yamanaka. Bioengineers at the University of Berkeley aim to create all of the human organs on-a-chip then connect them with micro-fluidic channels to create a complete human-being on-a-wafer. 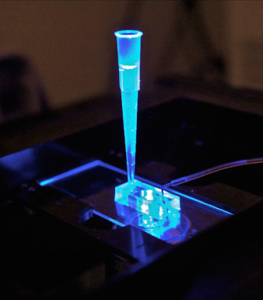 “We have learned how to derive almost any type of human tissue from skin stem cells as was first discovered by Yamanaka,” professor Kevin Healy told EE Times. “Our initial application is drug screening without having to use animals, but putting organs-on-a-chip using the stem cells of the patient could help with genetic diseases as well.”

Heart on-a-chip beats each time it pumps blood through micro-fluidic “veins” in its silicone and polymer container.

(Source: University of California at Berkeley)

As to connecting different organs using micro-fluidic channels to carry blood and natural biological fluids between them, the human-on-a-wafer could be used to study the interaction of drugs among different organs.

“For instance, one drug might solve a heart problem, but create toxins in the liver,” Healy told us. “Which would be much better to find out before administering to the patient.”

As to creating living robots in this way, Healy said that was not their mission on the current project, since their funding in coming from the National Institutes of Health’s (NIH’s) Tissue Chip for Drug Screening Initiative, an interagency collaboration specifically aimed at developing 3-D human tissue chips for drug screening.

The bipolar NE555 timer IC is widely used in inductorless dc-dc converters, most frequently in doubling and inverting converters. However,...