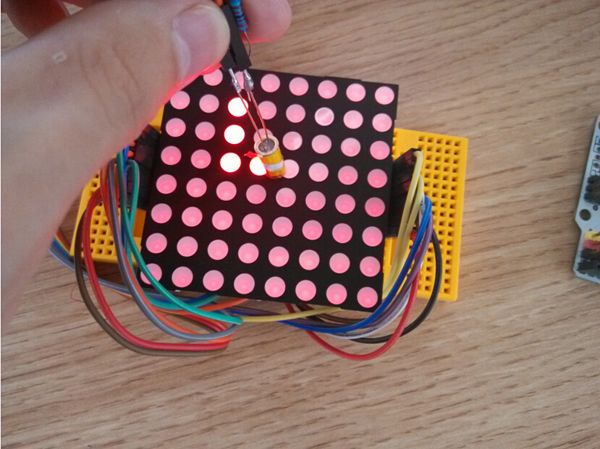 The project is mainly composed of three parts: row scan circuit, column scan circuit, the pen’s circuit. The principle block is as shown below. It has a photosensitive sensor in the pen, we use this pen to get the states of LED.

Make decoder’s Y0, Y1…effective in turn, but 74ls138 output low level on corresponding pin if have a effective input, because our dot matrix is common anode, we need an inverter, we use PNP transistor to constitute a inverter. Every eight times column scanning on a row scan.

To detect state of the points on the dot matrix we must light LED, and make it in the dim state, when the pen gets close to some point, we set the point highlight. But how do we know the coordinates of this point? The principle is: let LED light up one by one，the first of the first line, then the second of the first line…, until the last of the first line. Turn again the first of the second line, light up LED in turn in a loop. Every LED has state value: 0 stands for the dim state, 1 stands for highlight state. When the pen gets close to some point but it’s not the point’s turn to light up, because the pen did not detect light，it maintains a high level at the output of the comparator. When it’s turn to light up this point, comparator outputs a low level, MCU executes interrupt program when it detect a level change, and gets value of current row and column, then set state that find the point by value of row and column of 1, and set it to highlight state when it’s lighted up next time. We see the whole dot matrix light up when increasing scanning speed, rather than one by one.

Comes with all the hardware and software you need to quickly get your FPGA project going. Now you can focus...