Diyouware TwinTeeth is an open-source PCB mini-factory targeted to the electronic hobbyists. It is an innovative fabricator of Arduino™ shield-size PCBs which will help you to make PCB prototypes at home.

It includes the following functions: 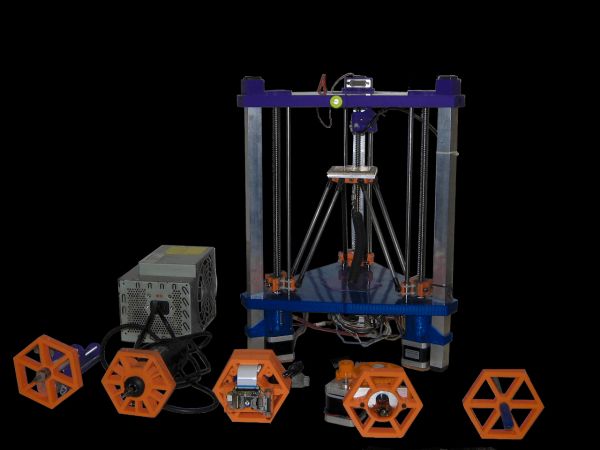 Diyouware TwinTeeth comes with interchangeable Toolheads which automates the processing of most PCB fabrication stages. They are fixed at the top of the robot so it is very easy to interchange them.

While traditional 3D printers or CNC machines move the tool while the working piece is fixed on the bed, TwinTeeth moves the bed while the tool is fixed. The first method is good if the tool is small and you want to make large pieces. But if the tool is heavy like a mini-rotary tool or a 3D extruder and the piece you are working on is light like a PCB, it is better to move the piece because it provides more precision and reduces vibrations.

Last year we fought with mechanical vibrations and belt resonances when we developed DiyouPCB. When we began TwinTeeh project we were afraid of not finding a free-vibration mechanical designing because we tried almost everything to avoid vibrations in DiyouPCB.

Belt resonances can be avoided using lead-screws. This was the base of our new designing. But we didn’t have a clear idea about how to eliminate other kind of vibrations, mainly produced by motors and linear bearings.

It is very important to avoid any kind of vibration when drawing with a laser because the beam is very fine (aprox. 620 nm) and any tiny motion would move it and distort the drawing.

Inspiration arose from my twin babies when they tried to brush their teeth for the first time. One of them was brushing his teeth in the normal way but the other one thought it was easier to move the head instead the brush. Why not?

I immediately thought that maybe we might avoid vibrations if we fix the laser while moving the PCB. And it works! So we called the project “TwinTeeth” to remember that day.

Fixing the tool on the top of the robot has other benefits: we can interchange it very easily because it is not attached to any moveable part. Also because the robot doesn’t have to move wirings, filaments, heavy loads, cable chains, etc.

We developed a complete software suite for the mini-factory.

It is the PC side software which allows you managing and controlling TwinTeeth. It was developed on Java using Processing development environment.

It includes the following funcionalities: