In my previous post, I showed my design of a dual tracking ±30V linear power supply. 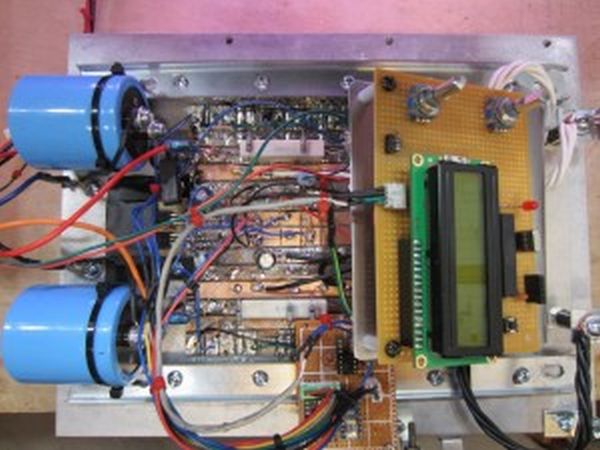 My goal was to use the transformer (28V+28V, center tapped) from an old Deltron W127G open-frame power supply and build a lab supply that can be digitally adjusted in both constant voltage and constant current modes. I also wanted each of the channels to be able to deliver up to 10 Amps of current so that I could fully utilize the 540VA transfomer from the W127G.

The following is the finalized schematic for the positive power supply portion (pretty much identical to the schematic I used in my simulations earlier). Here, I used four TIP35C‘s in parallel as the NPN transistor in the Sziklai pair. Because the input voltage is fixed at roughly 30V under maximum load, in a dead short scenario the power dissipated in the pass transistors is at least 300W and thus four transistors are needed to be able to share this worst case load. If you are building a power supply that is rated for just a couple of Amps, you can use just a single power transistor. I also added a buffer between the DAC and the voltage control loop OpAmp (IC1A) to improve stability. Because the digital/analog converter is not isolated, using a buffer between the DAC and the control point can greatly reduce the risk of damaging the DAC or the MCU should one of the OpAmps fail during operation. Similarly, a voltage follower was also added to buffer the current setting output from IC1B. The protection diodes were included to protect the inputs of the OpAmps during large voltage swings in transient events (such as power on).