This instructable describes a shield, which converts “Arduino” board in a digital multimeter (DMM).

The shield can be inserted on “Arduino” UNO und Duemilanove boards. It can work in three modes:

The second mode does not require the presence of LCM, what makes the shield very cheap.

The “Arduino” based DMM has the following functions:

I thought to add these warnings at the end, where the conclusions should be, but I have changed my mind because of the importance of this step. Before starting the copying of the design and doing some measurements the following things should be kept always in attention.

Dangerous voltages could appear at the shield nodes, connections and parts. As the shield is designed in the presented implementation, it can be used for measuring of voltages until 100 V. These voltages are dangerous for the life!!!. Even voltages close to 30 V in some cases can cause death. For this reason, all requirements concerning the work with high voltages must be met:

The main idea of the project was to create a shild for “Arduino”, which can be used for voltage and current measurements. The shield had to be relatively precise ~ 1% and to be able to display the measured data on the liquid crystal display.
Starting the design, I decided to keep the circuit as simple and cheap as possible. During the design phase, I have found that I can implement some additional useful functions without big efforts and investments. Because I have used dual opamp chip and one of the embedded amplifiers was used for the ampere meter, I was looking for a way, how I could use the second one. I decided to design with its use a voltage to current converter, which further could be used for other functions : resistance measurements, diode/LED functionality checks, NPN Transistor gain measurements. This required some additional parts, but have added more functionality to the board. 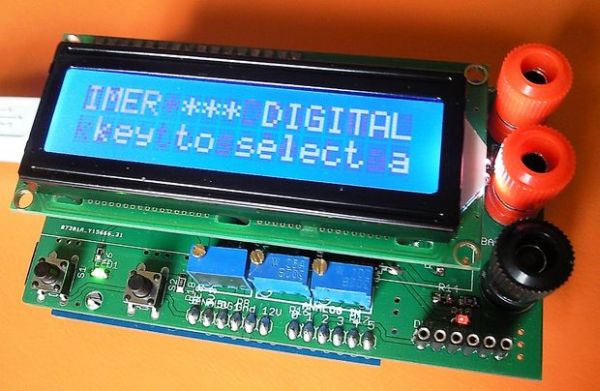 Although the main two functions could be done very precise (especially with final software trimming), the additional functions have some lack of accuracy. The error in some cases can reach ~10%. The reason for that will be explained further. Keep reading :-).
There are some simple solutions, which can drastically improve also this accuracy, but they require some additional parts and are matter of possible feature project.
The schematics and the PCB board layout are presented on the pictures.

Remarks on the schematic:

The “Eagle” design files are attached to the project and are available for download and free use.

Step 4: Explanation : How this shield works…

The schematic may look quite complicated. For that reason I will try to explain how the different functions work, separating the circuit in sub-blocks, simplifying them and showing how the calculations were done.

Let’s start with the voltmeter. On the picture, its simplified schematic can be seen. Three voltage dividers ( for the three ranges) can  be alternatively formed by use of switches controlled by the “Arduino” board. Only one switch is closed during the voltage measurement. As switches I use NMOS enhancement mode switching transistors from the type BSS123. The have typical Ron around 6-10 Ohms, which does not influence a lot  the accuracy for the ranges 0-10V, 0-30V. For the range 0-100V, their Ron is taken into account, when calculating the voltage divider ratio.
The Zener diode is used to clamp the Vmeas potential ( the voltage applied to the analog input A0 of the “Arduino”) at 5.6V and to protect the Atmel chip. Its clamping value is taken with the presumption, that the board will be supplied with 5V source. This Zener diode must be very carefully chosen. I took one of ten measured. It must satisfy two criteria:

Step 5: How the current is measured…

You can see how the current is measured on the presented schematic diagram.
The measured current is passed through 1 OhM resistance to the ground. Amplifier, which  output is connected with the “Arduino” analog input A1 is amplifying the voltage drop over the resistor with gain 10.
To prevent damages, when higher then desired current is applied at the ampere meter, I have put a resettable PTC for 500mA.

Step 6: How the resistance is measured….

A reference voltage with respect the positive supply range is created by the use of the Zener diode (2V). The generated in this way voltage reference is applied to the input of voltage to current converter realized by the opamp and the PNP BJT (PMOS) transistor, at which emitter (source) terminal, adjustable and commutable  resistors are connected. The voltage over these resistors is identical with the voltage over the Zener diode. The “Arduino” board controls, which of both switches will be closed, defining in this way through which of both resistors will flow current. Thus two possible current values are possible: 10uA, 2.5mA. These currents can be adjusted very preciously. The generated so current is passed through the measured device (resistor, diode, LED, transistor) and the voltage drop appeared over the device under test (DUT) is applied to the analog pin A2 of the “Arduino” board.
For the VIC (voltage to current converter) can be used as well PMOS or PNP bipolar devices.
At the first try I was using PMOS NDT2955 device. (I had one available, and decided to use it). The opamap used was LM358.
Making some tests, I have found that some measured data is not stable. I found that oscillation appeared. The VIC was not stable.
The reason for that was: The maximal capacitive load, which the LM358 can drive is less than 50pF (without resistive isolation).
The gate capacitance of the used PMOS was 600pF, which was making the whole circuit unstable. Then, I have changed the transistor with PNP BJT (Bipolar Junction Transistor) 2n3906, and the circuit was stabilized.
In other words: the type of the opamp and transistor of the VIC must be carefully chosen. The LM358 is not the best choice – it has stability problems with high capacitive loads, it has sensible offset and the output swing is not the best. If more precision is required better to be chosen an R2R (rail to rail) input/output opamp with JFET/CMOS (low input current) inputs, with low offset.
The higher offset in my case would be useful “feature”, because further, in the software tuning part, I would like to show, how this offset can be corrected by the use of the software.
Using the PMOS transistor, will allow us to use the “load/no load” function of the Ohmmeter, but could create stability problems.
Using PNP BJT has the  advantage that the circuit is stable.
In both cases, independently, which type devices are used (OK..mostly for the PMOS), they create small accuracy problems.
The reason for lower accuracy is the limited output resistance of both devices. What is this meaning:
Lets take the resistor range 1000 Ohm. In this case, reference current of 2.5mA are passed through the resistor, and the generated voltage is applied to the ADC input of the Atmega chip. The resistor value, which we want to measure can vary between 0 Ohm and 1000 Ohm. The voltage Vmeas in this way also varies between 0V and 2.5V. The Vce (Vds) : Collector-emitter/ Drain-source voltage varies between 0.5V-3V.  The variation of the mentioned voltage affects directly the collector-emitter / drain-source flowing  current, what finally results in worse accuracy. The described phenomena can be better understood looking on the typical NPN BJT transfer characteristics presented on the picture.
This effect can be in some limits corrected by the software, but if some non linearity  effects are available, the correction becomes very difficult.

Step 7: How the Beta is measured….

I've been encountering lots or Arduino projects but generally most are on intermediate and advanced level and only a few...